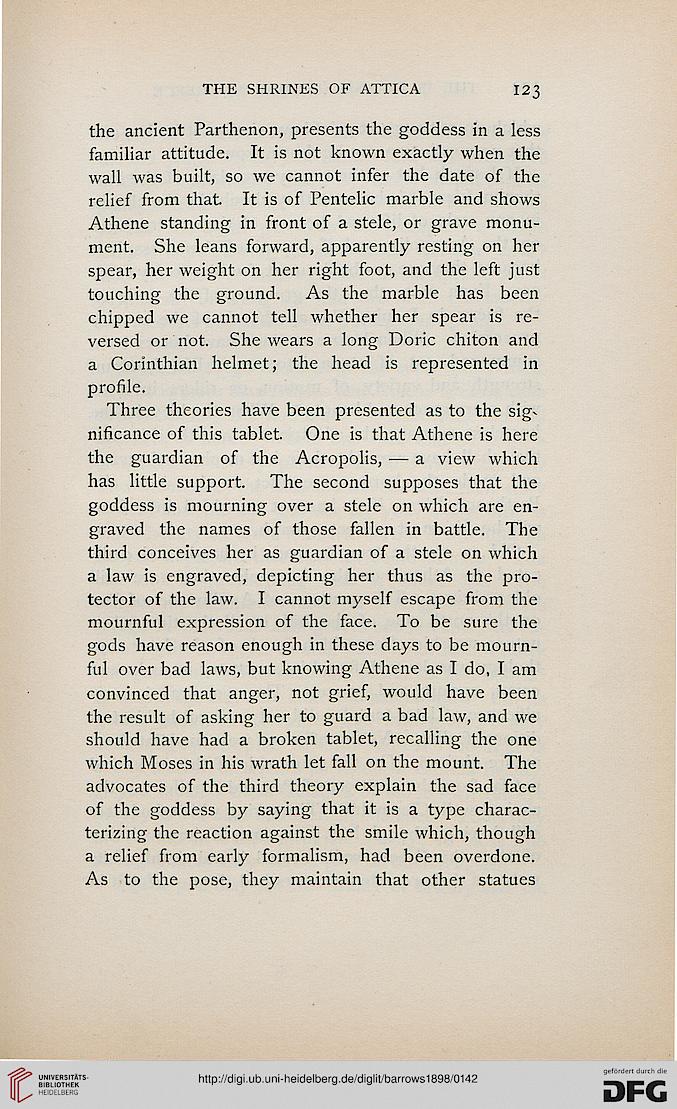 Information about OCR text
THE SHRINKS OF ATTICA 123

the ancient Parthenon, presents the goddess in a less
familiar attitude. It is not known exactly when the
wall was built, so we cannot infer the date of the
relief from that. It is of Pentelic marble and shows
Athene standing in front of a stele, or grave monu-
ment. She leans forward, apparently resting on her
spear, her weight on her right foot, and the left just
touching the ground. As the marble has been
chipped we cannot tell whether her spear is re-
versed or not. She wears a long Doric chiton and
a Corinthian helmet; the head is represented in
profile.

Three theories have been presented as to the sig-
nificance of this tablet. One is that Athene is here
the guardian of the Acropolis, — a view which
has little support. The second supposes that the
goddess is mourning over a stele on which are en-
graved the names of those fallen in battle. The
third conceives her as guardian of a stele on which
a law is engraved, depicting her thus as the pro-
tector of the law. I cannot myself escape from the
mournful expression of the face. To be sure the
gods have reason enough in these days to be mourn-
ful over bad laws, but knowing Athene as I do, I am
convinced that anger, not grief, would have been
the result of asking her to guard a bad law, and we
should have had a broken tablet, recalling the one
which Moses in his wrath let fall on the mount. The
advocates of the third theory explain the sad face
of the goddess by saying that it is a type charac-
terizing the reaction against the smile which, though
a relief from early formalism, had been overdone.
As to the pose, they maintain that other statues