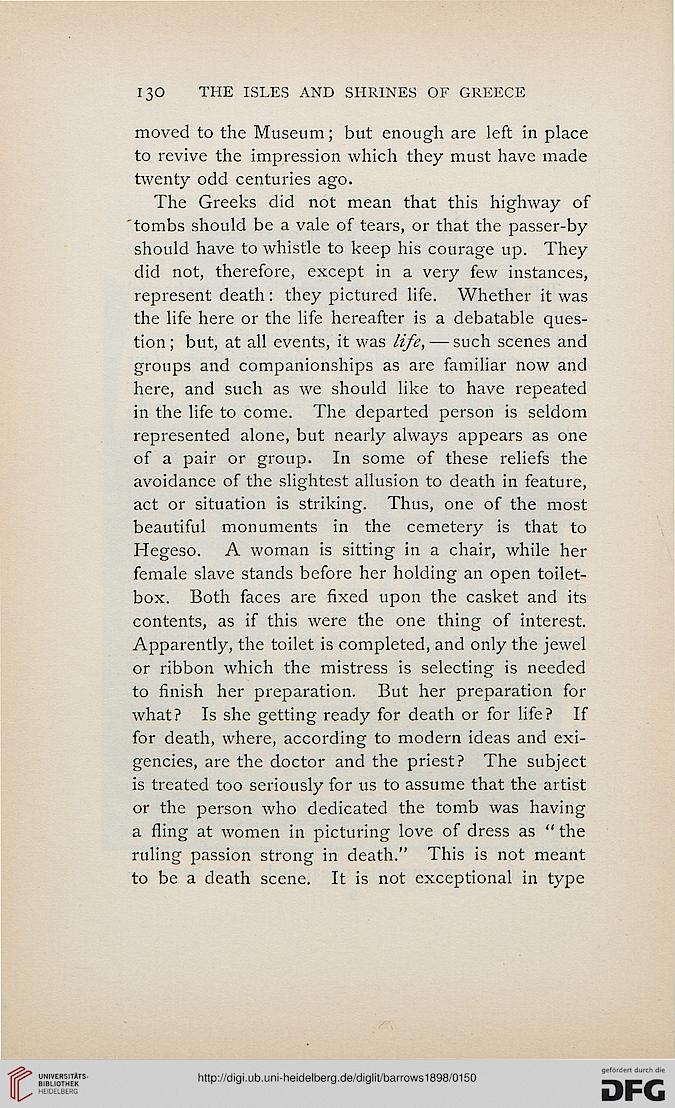 Information about OCR text
130 THE ISLES AND SHRINES OF GREECE

moved to the Museum; but enough are left in place
to revive the impression which they must have made
twenty odd centuries ago.

The Greeks did not mean that this highway of
tombs should be a vale of tears, or that the passer-by
should have to whistle to keep his courage up. They
did not, therefore, except in a very few instances,
represent death : they pictured life. Whether it was
the life here or the life hereafter is a debatable ques-
tion; but, at all events, it was life, — such scenes and
groups and companionships as are familiar now and
here, and such as we should like to have repeated
in the life to come. The departed person is seldom
represented alone, but nearly always appears as one
of a pair or group. In some of these reliefs the
avoidance of the slightest allusion to death in feature,
act or situation is striking. Thus, one of the most
beautiful monuments in the cemetery is that to
Hegeso. A woman is sitting in a chair, while her
female slave stands before her holding an open toilet-
box. Both faces are fixed upon the casket and its
contents, as if this were the one thing of interest.
Apparently, the toilet is completed, and only the jewel
or ribbon which the mistress is selecting is needed
to finish her preparation. But her preparation for
what? Is she getting ready for death or for life? If
for death, where, according to modern ideas and exi-
gencies, are the doctor and the priest? The subject
is treated too seriously for us to assume that the artist
or the person who dedicated the tomb was having
a fling at women in picturing love of dress as " the
ruling passion strong in death." This is not meant
to be a death scene. It is not exceptional in type