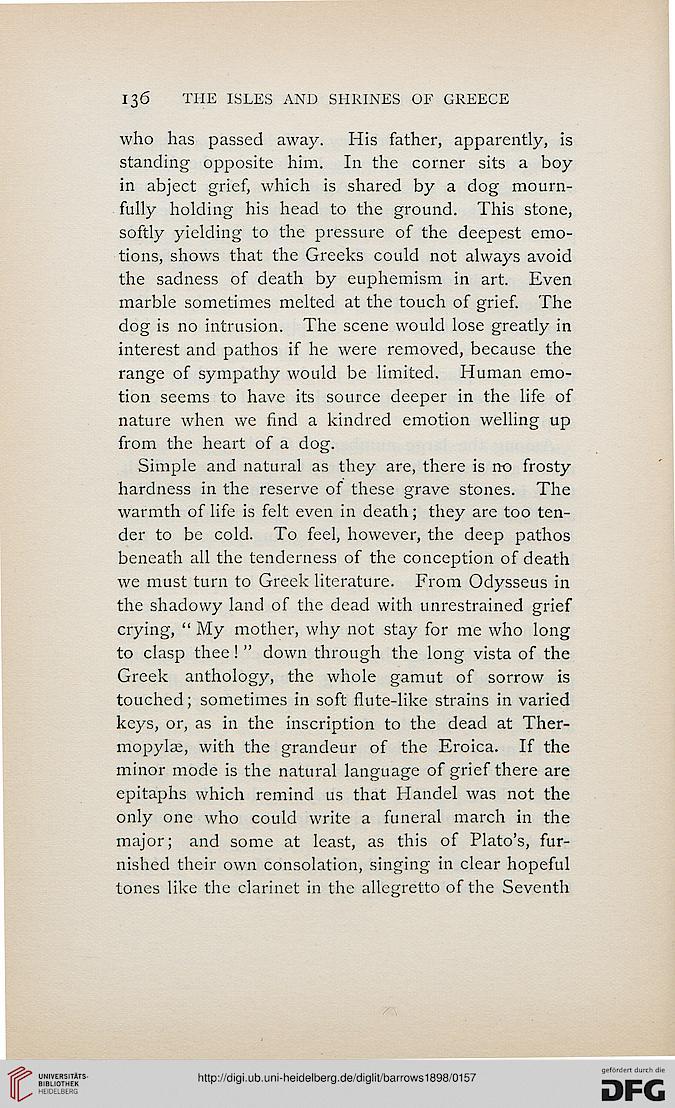 Information about OCR text
136 THE ISLES AND SHRINES OF GREECE

who has passed away. His father, apparently, is
standing opposite him. In the corner sits a boy
in abject grief, which is shared by a dog mourn-
fully holding his head to the ground. This stone,
softly yielding to the pressure of the deepest emo-
tions, shows that the Greeks could not always avoid
the sadness of death by euphemism in art. Even
marble sometimes melted at the touch of grief. The
dog is no intrusion. The scene would lose greatly in
interest and pathos if he were removed, because the
range of sympathy would be limited. Human emo-
tion seems to have its source deeper in the life of
nature when we find a kindred emotion welling up
from the heart of a dog.

Simple and natural as they are, there is no frosty
hardness in the reserve of these grave stones. The
warmth of life is felt even in death; they are too ten-
der to be cold. To feel, however, the deep pathos
beneath all the tenderness of the conception of death
we must turn to Greek literature. From Odysseus in
the shadowy land of the dead with unrestrained grief
crying, " My mother, why not stay for me who long
to clasp thee! " down through the long vista of the
Greek anthology, the whole gamut of sorrow is
touched; sometimes in soft flute-like strains in varied
keys, or, as in the inscription to the dead at Ther-
mopylae, with the grandeur of the Eroica. If the
minor mode is the natural language of grief there are
epitaphs which remind us that Handel was not the
only one who could write a funeral march in the
major; and some at least, as this of Plato's, fur-
nished their own consolation, singing in clear hopeful
tones like the clarinet in the allegretto of the Seventh