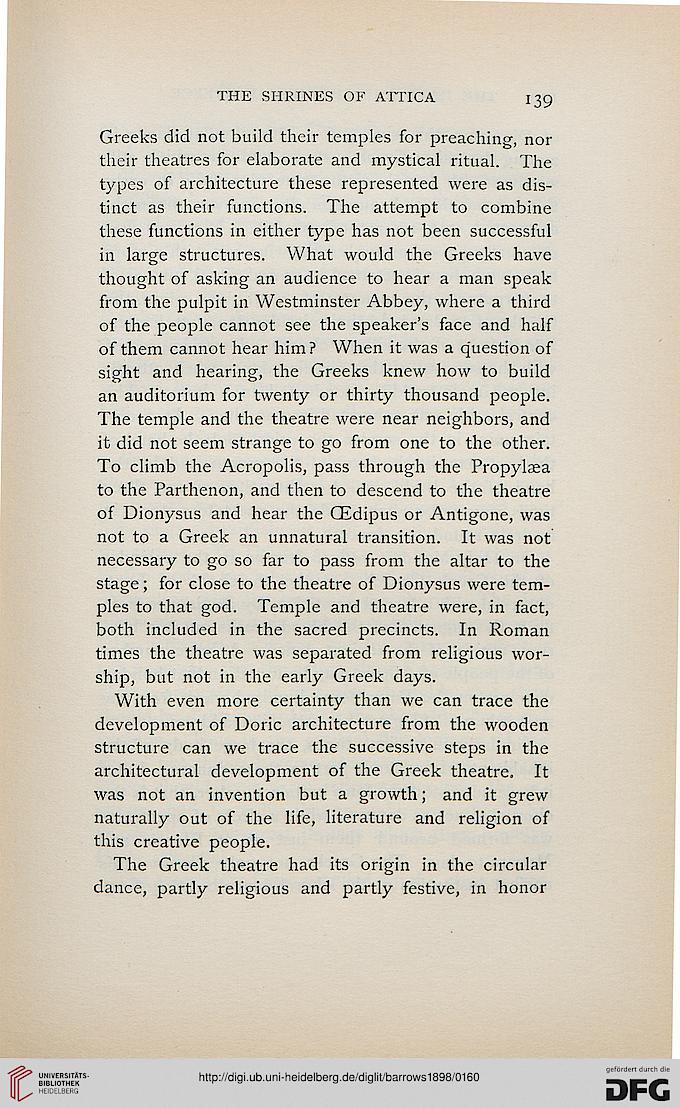 Information about OCR text
THE SHRINES OF ATTICA 139

Greeks did not build their temples for preaching, nor
their theatres for elaborate and mystical ritual. The
types of architecture these represented were as dis-
tinct as their functions. The attempt to combine
these functions in either type has not been successful
in large structures. What would the Greeks have
thought of asking an audience to hear a man speak
from the pulpit in Westminster Abbey, where a third
of the people cannot see the speaker's face and half
of them cannot hear him? When it was a question of
sight and hearing, the Greeks knew how to build
an auditorium for twenty or thirty thousand people.
The temple and the theatre were near neighbors, and
it did not seem strange to go from one to the other.
To climb the Acropolis, pass through the Propylsea
to the Parthenon, and then to descend to the theatre
of Dionysus and hear the GEdipus or Antigone, was
not to a Greek an unnatural transition. It was not
necessary to go so far to pass from the altar to the
stage; for close to the theatre of Dionysus were tem-
ples to that god. Temple and theatre were, in fact,
both included in the sacred precincts. In Roman
times the theatre was separated from religious wor-
ship, but not in the early Greek days.

With even more certainty than we can trace the
development of Doric architecture from the wooden
structure can we trace the successive steps in the
architectural development of the Greek theatre. It
was not an invention but a growth; and it grew
naturally out of the life, literature and religion of
this creative people.

The Greek theatre had its origin in the circular
dance, partly religious and partly festive, in honor