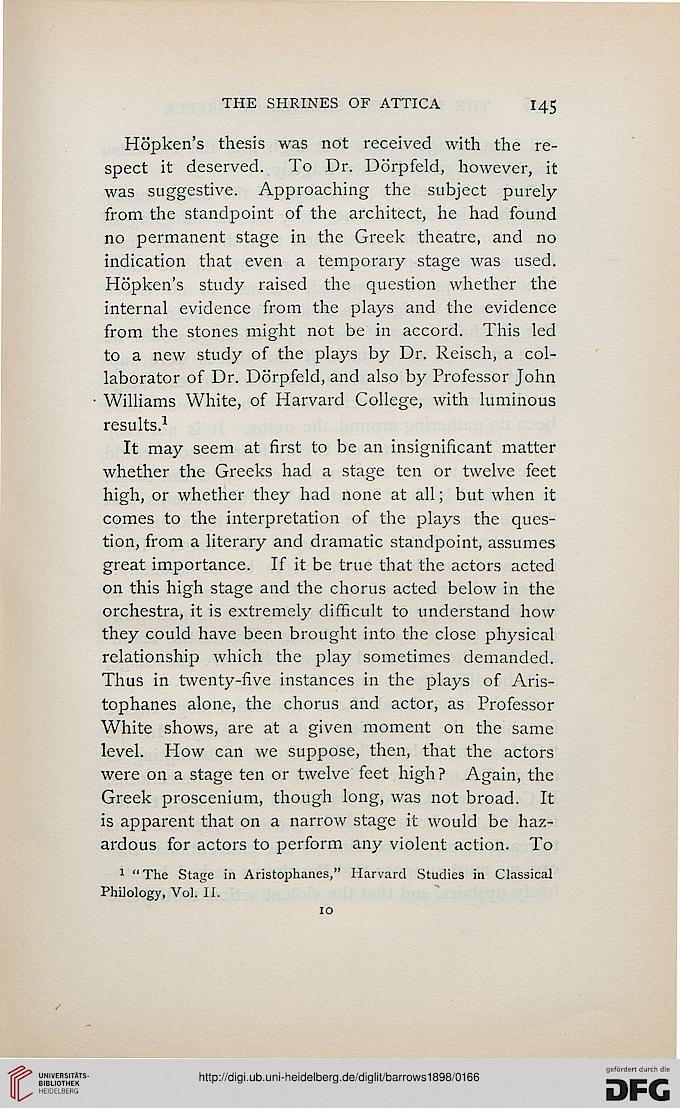 Information about OCR text
THE SHRINES OF ATTICA 145

Hopken's thesis was not received with the re-
spect it deserved. To Dr. Dorpfeld, however, it
was suggestive. Approaching the subject purely
from the standpoint of the architect, he had found
no permanent stage in the Greek theatre, and no
indication that even a temporary stage was used.
Hopken's study raised the question whether the
internal evidence from the plays and the evidence
from the stones might not be in accord. This led
to a new study of the plays by Dr. Reisch, a col-
laborator of Dr. Dorpfeld, and also by Professor John
■ Williams White, of Harvard College, with luminous
results.1

It may seem at first to be an insignificant matter
whether the Greeks had a stage ten or twelve feet
high, or whether they had none at all; but when it
comes to the interpretation of the plays the ques-
tion, from a literary and dramatic standpoint, assumes
great importance. If it be true that the actors acted
on this high stage and the chorus acted below in the
orchestra, it is extremely difficult to understand how
they could have been brought into the close physical
relationship which the play sometimes demanded.
Thus in twenty-five instances in the plays of Aris-
tophanes alone, the chorus and actor, as Professor
White shows, are at a given moment on the same
level. How can we suppose, then, that the actors
were on a stage ten or twelve feet high? Again, the
Greek proscenium, though long, was not broad. It
is apparent that on a narrow stage it would be haz-
ardous for actors to perform any violent action. To