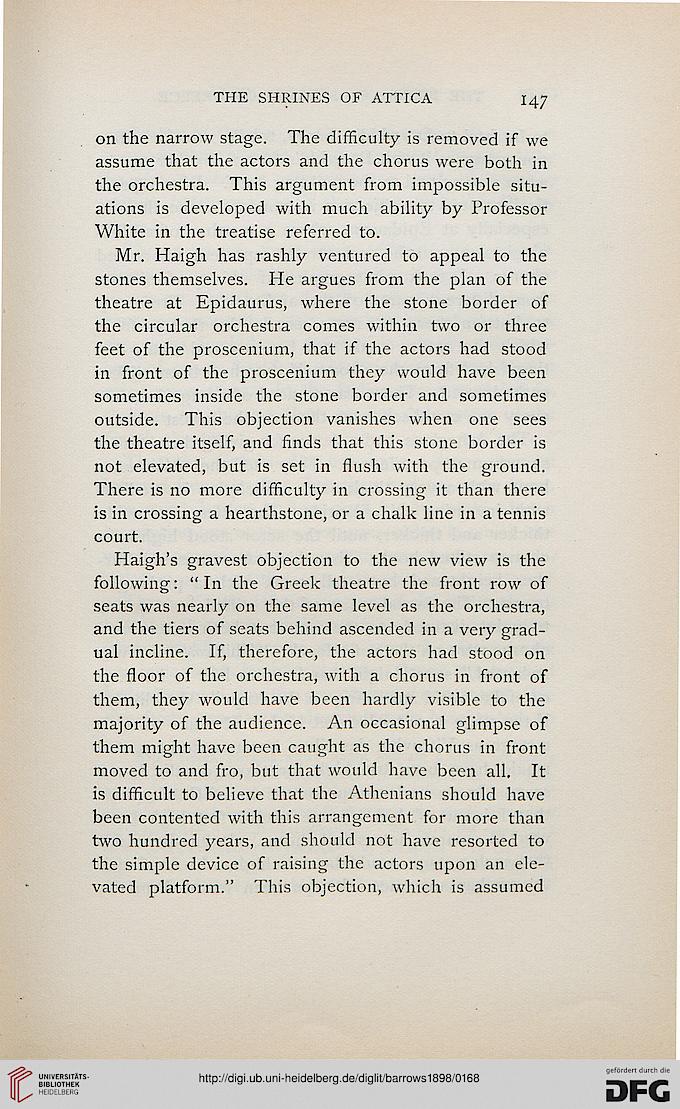 Information about OCR text
THE SHRINES OF ATTICA 147

on the narrow stage. The difficulty is removed if we
assume that the actors and the chorus were both in
the orchestra. This argument from impossible situ-
ations is developed with much ability by Professor
White in the treatise referred to.

Mr. Haigh has rashly ventured to appeal to the
stones themselves. He argues from the plan of the
theatre at Epidaurus, where the stone border of
the circular orchestra comes within two or three
feet of the proscenium, that if the actors had stood
in front of the proscenium they would have been
sometimes inside the stone border and sometimes
outside. This objection vanishes when one sees
the theatre itself, and finds that this stone border is
not elevated, but is set in flush with the ground.
There is no more difficulty in crossing it than there
is in crossing a hearthstone, or a chalk line in a tennis
court.

Haigh's gravest objection to the new view is the
following: "In the Greek theatre the front row of
seats was nearly on the same level as the orchestra,
and the tiers of scats behind ascended in a very grad-
ual incline. If, therefore, the actors had stood on
the floor of the orchestra, with a chorus in front of
them, they would have been hardly visible to the
majority of the audience. An occasional glimpse of
them might have been caught as the chorus in front
moved to and fro, but that would have been all. It
is difficult to believe that the Athenians should have
been contented with this arrangement for more than
two hundred years, and should not have resorted to
the simple device of raising the actors upon an ele-
vated platform." This objection, which is assumed