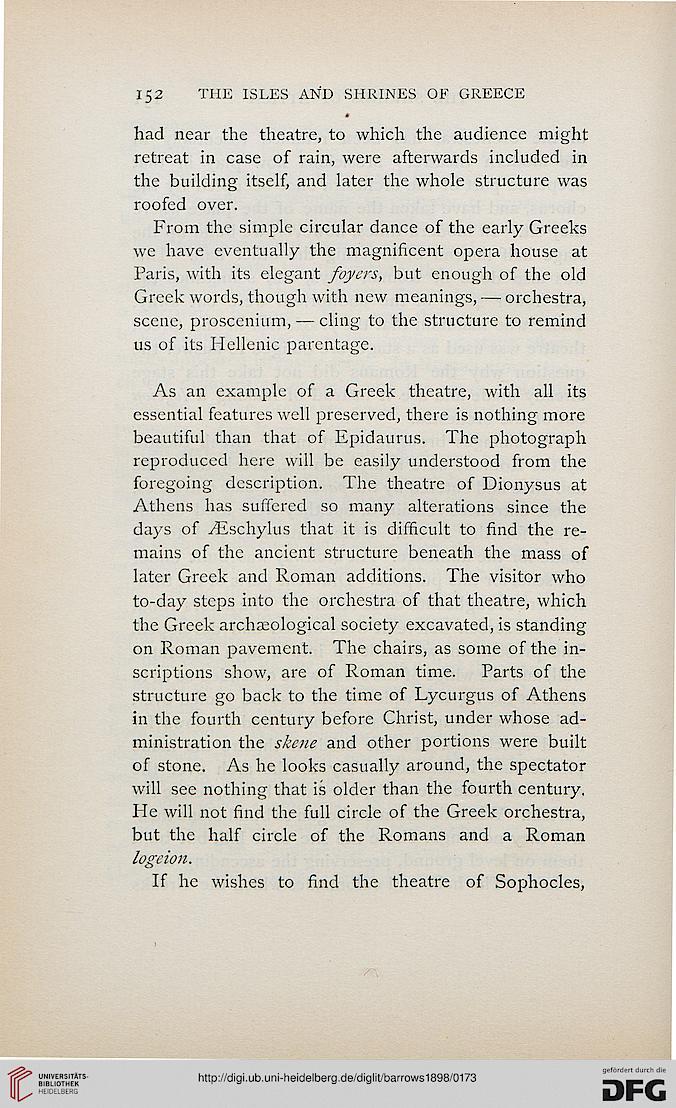 Information about OCR text
152 THE ISLES AND SHRINES OF GREECE

had near the theatre, to which the audience might
retreat in case of rain, were afterwards included in
the building itself, and later the whole structure was
roofed over.

From the simple circular dance of the early Greeks
we have eventually the magnificent opera house at
Paris, with its elegant foyers, but enough of the old
Greek words, though with new meanings, — orchestra,
scene, proscenium, — cling to the structure to remind
us of its Hellenic parentage.

As an example of a Greek theatre, with all its
essential features well preserved, there is nothing more
beautiful than that of Epidaurus. The photograph
reproduced here will be easily understood from the
foregoing description. The theatre of Dionysus at
Athens has suffered so many alterations since the
days of ^Eschylus that it is difficult to find the re-
mains of the ancient structure beneath the mass of
later Greek and Roman additions. The visitor who
to-day steps into the orchestra of that theatre, which
the Greek archaeological society excavated, is standing
on Roman pavement. The chairs, as some of the in-
scriptions show, are of Roman time. Parts of the
structure go back to the time of Lycurgus of Athens
in the fourth century before Christ, under whose ad-
ministration the skene and other portions were built
of stone. As he looks casually around, the spectator
will sec nothing that is older than the fourth century.
He will not find the full circle of the Greek orchestra,
but the half circle of the Romans and a Roman
logeion.

If he wishes to find the theatre of Sophocles,