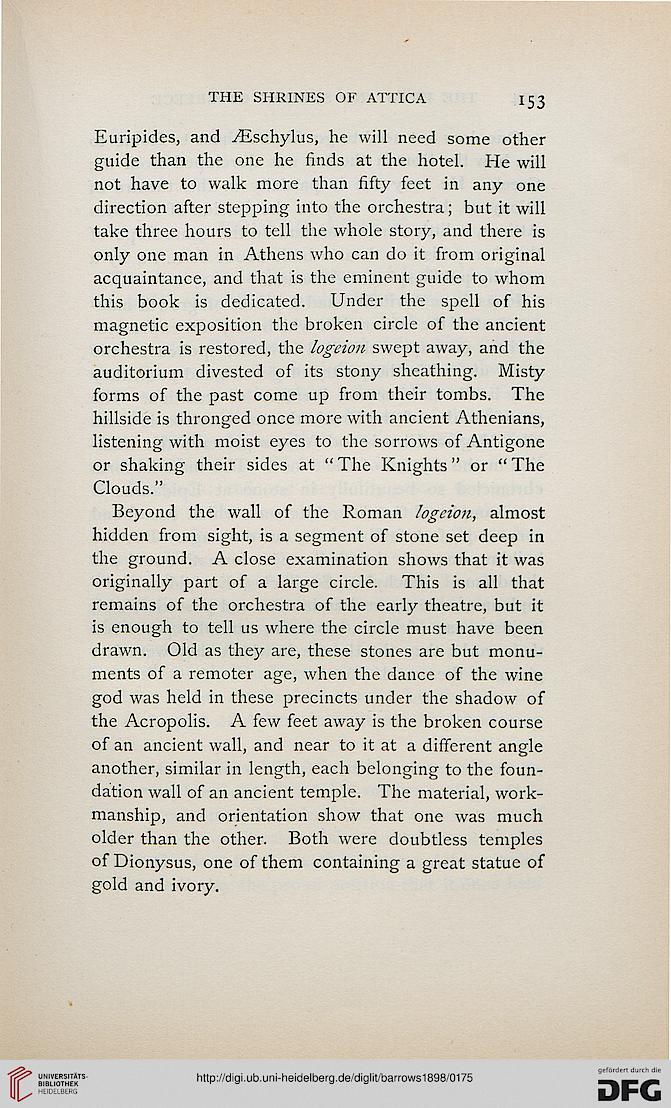 Information about OCR text
THE SHRINES OF ATTICA 153

Euripides, and ^Eschylus, he will need some other
guide than the one he finds at the hotel. He will
not have to walk more than fifty feet in any one
direction after stepping into the orchestra; but it will
take three hours to tell the whole story, and there is
only one man in Athens who can do it from original
acquaintance, and that is the eminent guide to whom
this book is dedicated. Under the spell of his
magnetic exposition the broken circle of the ancient
orchestra is restored, the logeion swept away, and the
auditorium divested of its stony sheathing. Misty
forms of the past come up from their tombs. The
hillside is thronged once more with ancient Athenians,
listening with moist eyes to the sorrows of Antigone
or shaking their sides at " The Knights" or " The
Clouds."

Beyond the wall of the Roman logeion, almost
hidden from sight, is a segment of stone set deep in
the ground. A close examination shows that it was
originally part of a large circle. This is all that
remains of the orchestra of the early theatre, but it
is enough to tell us where the circle must have been
drawn. Old as they are, these stones are but monu-
ments of a remoter age, when the dance of the wine
god was held in these precincts under the shadow of
the Acropolis. A few feet away is the broken course
of an ancient wall, and near to it at a different angle
another, similar in length, each belonging to the foun-
dation wall of an ancient temple. The material, work-
manship, and orientation show that one was much
older than the other. Both were doubtless temples
of Dionysus, one of them containing a great statue of
gold and ivory.