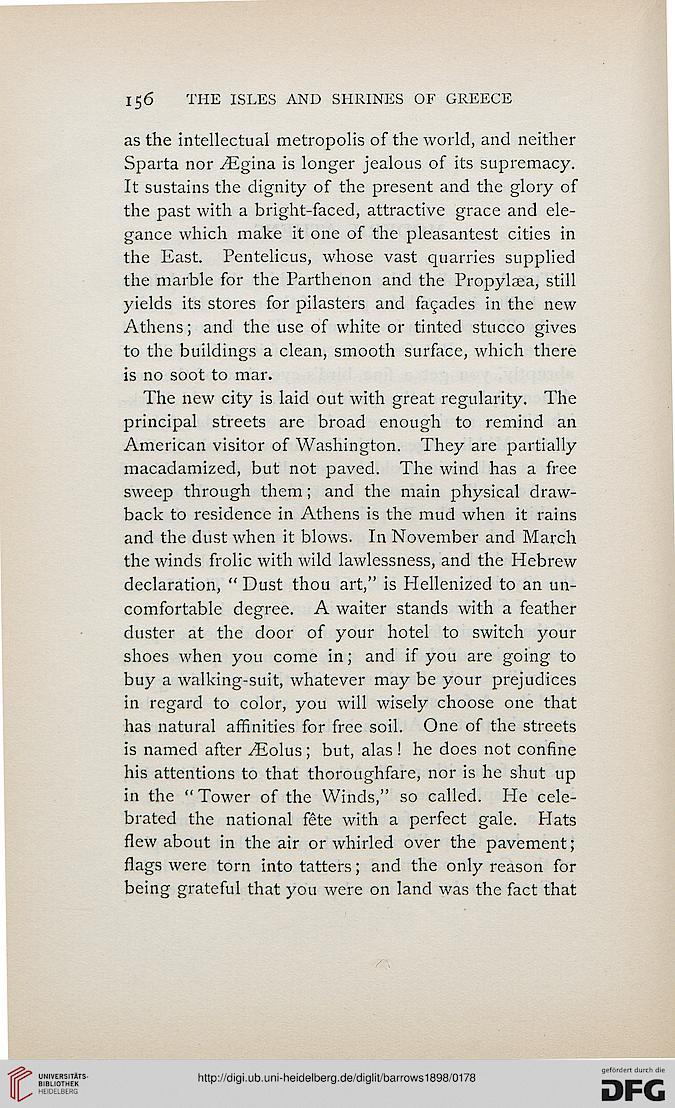 Information about OCR text
156 THE ISLES AND SHRINES OF GREECE

as the intellectual metropolis of the world, and neither
Sparta nor yEgina is longer jealous of its supremacy.
It sustains the dignity of the present and the glory of
the past with a bright-faced, attractive grace and ele-
gance which make it one of the pleasantest cities in
the East. Pcntelicus, whose vast quarries supplied
the marble for the Parthenon and the Propylsea, still
yields its stores for pilasters and facades in the new
Athens; and the use of white or tinted stucco gives
to the buildings a clean, smooth surface, which there
is no soot to mar.

The new city is laid out with great regularity. The
principal streets are broad enough to remind an
American visitor of Washington. They are partially
macadamized, but not paved. The wind has a free
sweep through them; and the main physical draw-
back to residence in Athens is the mud when it rains
and the dust when it blows. In November and March
the winds frolic with wild lawlessness, and the Hebrew
declaration, " Dust thou art," is Hellenized to an un-
comfortable degree. A waiter stands with a feather
duster at the door of your hotel to switch your
shoes when you come in; and if you are going to
buy a walking-suit, whatever may be your prejudices
in regard to color, you will wisely choose one that
has natural affinities for free soil. One of the streets
is named after ^Eolus; but, alas ! he does not confine
his attentions to that thoroughfare, nor is he shut up
in the " Tower of the Winds," so called. He cele-
brated the national fete with a perfect gale. Hats
flew about in the air or whirled over the pavement;
flags were torn into tatters; and the only reason for
being grateful that you were on land was the fact that