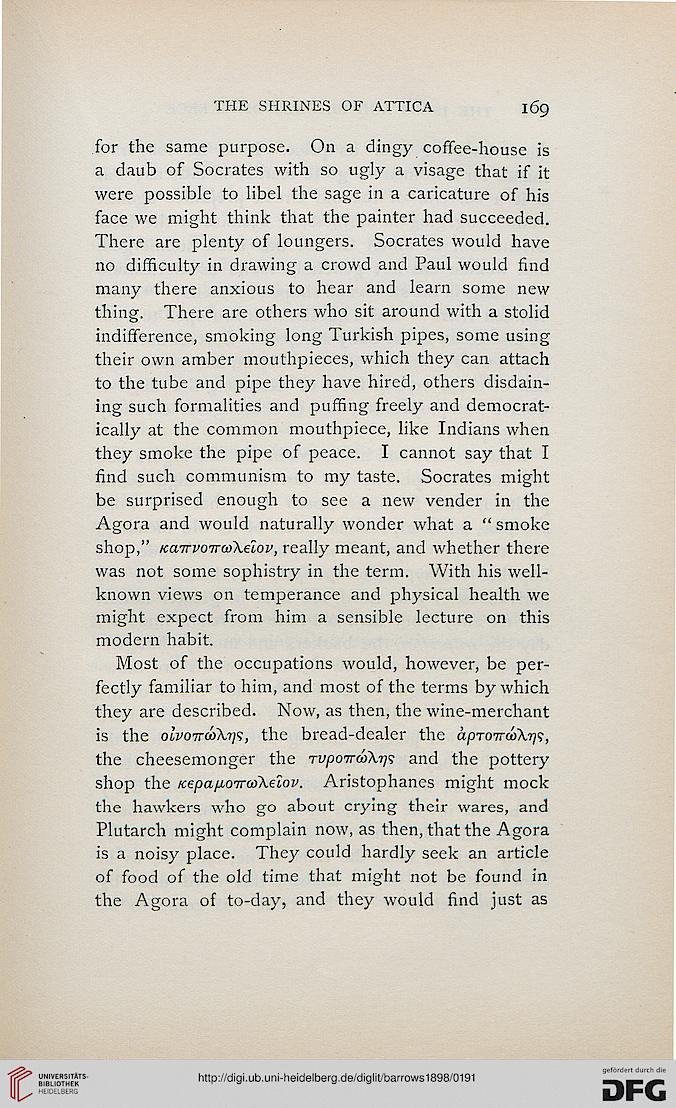 Information about OCR text
THE SHRINES OF ATTICA 169

for the same purpose. On a clingy coffee-house is
a daub of Socrates with so ugly a visage that if it
were possible to libel the sage in a caricature of his
face we might think that the painter had succeeded.
There are plenty of loungers. Socrates would have
no difficulty in drawing a crowd and Paul would find
many there anxious to hear and learn some new
thing. There are others who sit around with a stolid
indifference, smoking long Turkish pipes, some using
their own amber mouthpieces, which they can attach
to the tube and pipe they have hired, others disdain-
ing such formalities and puffing freely and democrat-
ically at the common mouthpiece, like Indians when
they smoke the pipe of peace. I cannot say that I
find such communism to my taste. Socrates might
be surprised enough to see a new vender in the
Agora and would naturally wonder what a " smoke
shop," KaTrvoTrwXelov, really meant, and whether there
was not some sophistry in the term. With his well-
known views on temperance and physical health we
might expect from him a sensible lecture on this
modern habit.

Most of the occupations would, however, be per-
fectly familiar to him, and most of the terms by which
they are described. Now, as then, the wine-merchant
is the otVcn-wX?;?, the bread-dealer the apT07ra>\???,
the cheesemonger the TvpoTrwkrjs and the pottery
shop the /cepa/jLOTTcoXelov. Aristophanes might mock
the hawkers who go about crying their wares, and
Plutarch might complain now, as then, that the Agora
is a noisy place. They could hardly seek an article
of food of the old time that might not be found in
the Agora of to-day, and they would find just as