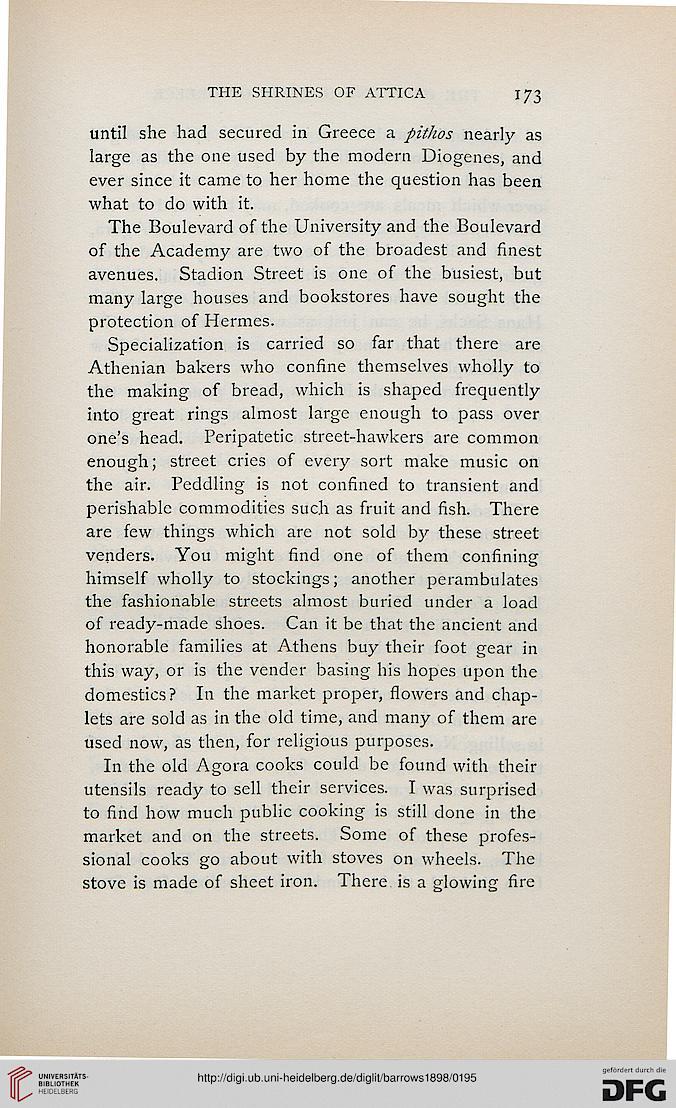 Information about OCR text
THE SHRINES OF ATTICA 173

until she had secured in Greece a pitJios nearly as
large as the one used by the modern Diogenes, and
ever since it came to her home the question has been
what to do with it.

The Boulevard of the University and the Boulevard
of the Academy are two of the broadest and finest
avenues. Stadion Street is one of the busiest, but
many large houses and bookstores have sought the
protection of Hermes.

Specialization is carried so far that there are
Athenian bakers who confine themselves wholly to
the making of bread, which is shaped frequently
into great rings almost large enough to pass over
one's head. Peripatetic street-hawkers are common
enough; street cries of every sort make music on
the air. Peddling is not confined to transient and
perishable commodities such as fruit and fish. There
are few things which are not sold by these street
venders. You might find one of them confining
himself wholly to stockings; another perambulates
the fashionable streets almost buried under a load
of ready-made shoes. Can it be that the ancient and
honorable families at Athens buy their foot gear in
this way, or is the vender basing his hopes upon the
domestics ? In the market proper, flowers and chap-
lets are sold as in the old time, and many of them are
used now, as then, for religious purposes.

In the old Agora cooks could be found with their
utensils ready to sell their services. I was surprised
to find how much public cooking is still done in the
market and on the streets. Some of these profes-
sional cooks go about with stoves on wheels. The
stove is made of sheet iron. There is a glowinjj fire