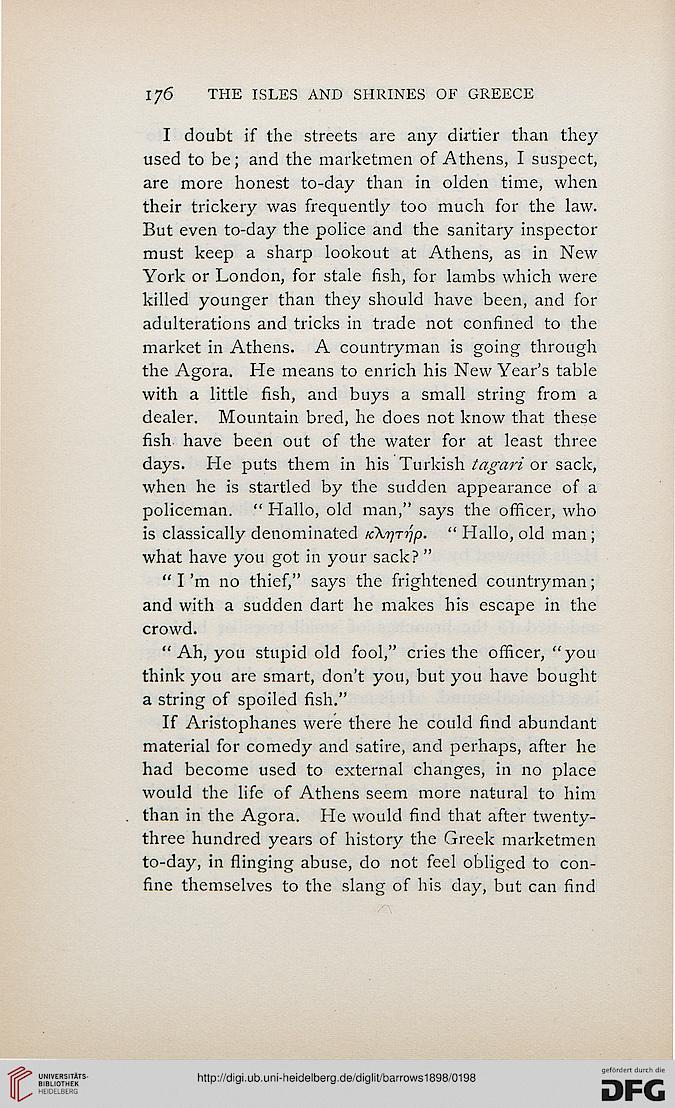 Information about OCR text
176 THE ISLES AND SHRINES OF GREECE

I doubt if the streets are any dirtier than they
used to be; and the marketmen of Athens, I suspect,
are more honest to-day than in olden time, when
their trickery was frequently too much for the law.
But even to-day the police and the sanitary inspector
must keep a sharp lookout at Athens, as in New
York or London, for stale fish, for lambs which were
killed younger than they should have been, and for
adulterations and tricks in trade not confined to the
market in Athens. A countryman is going through
the Agora. He means to enrich his New Year's table
with a little fish, and buys a small string from a
dealer. Mountain bred, he does not know that these
fish have been out of the water for at least three
days. He puts them in his Turkish tagari or sack,
when he is startled by the sudden appearance of a
policeman. " Hallo, old man," says the officer, who
is classically denominated icXrjTijp. " Hallo, old man ;
what have you got in your sack? "

" I 'm no thief," says the frightened countryman;
and with a sudden dart he makes his escape in the
crowd.

" Ah, you stupid old fool," cries the officer, "you
think you are smart, don't you, but you have bought
a string of spoiled fish."

If Aristophanes were there he could find abundant
material for comedy and satire, and perhaps, after he
had become used to external changes, in no place
would the life of Athens seem more natural to him
than in the Agora. He would find that after twenty-
three hundred years of history the Greek marketmen
to-day, in flinging abuse, do not feel obliged to con-
fine themselves to the slang of his day, but can find