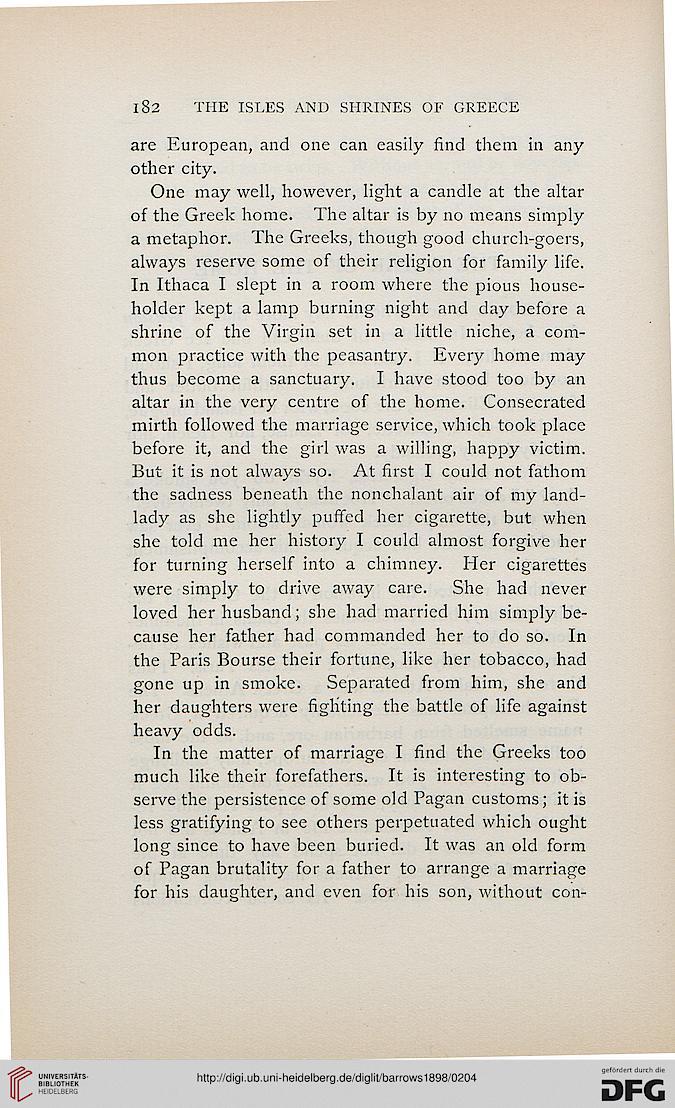 Information about OCR text
182 THE ISLES AND SHRINES OF GREECE

are European, and one can easily find them in any
other city.

One may well, however, light a candle at the altar
of the Greek home. The altar is by no means simply
a metaphor. The Greeks, though good church-goers,
always reserve some of their religion for family life.
In Ithaca I slept in a room where the pious house-
holder kept a lamp burning night and day before a
shrine of the Virgin set in a little niche, a com-
mon practice with the peasantry. Every home may
thus become a sanctuary. I have stood too by an
altar in the very centre of the home. Consecrated
mirth followed the marriage service, which took place
before it, and the girl was a willing, happy victim.
But it is not always so. At first I could not fathom
the sadness beneath the nonchalant air of my land-
lady as she lightly puffed her cigarette, but when
she told me her history I could almost forgive her
for turning herself into a chimney. Her cigarettes
were simply to drive away care. She had never
loved her husband; she had married him simply be-
cause her father had commanded her to do so. In
the Paris Bourse their fortune, like her tobacco, had
gone up in smoke. Separated from him, she and
her daughters were fighting the battle of life against
heavy odds.

In the matter of marriage I find the Greeks too
much like their forefathers. It is interesting to ob-
serve the persistence of some old Pagan customs; it is
less gratifying to see others perpetuated which ought
long since to have been buried. It was an old form
of Pagan brutality for a father to arrange a marriage
for his daughter, and even for his son, without con-