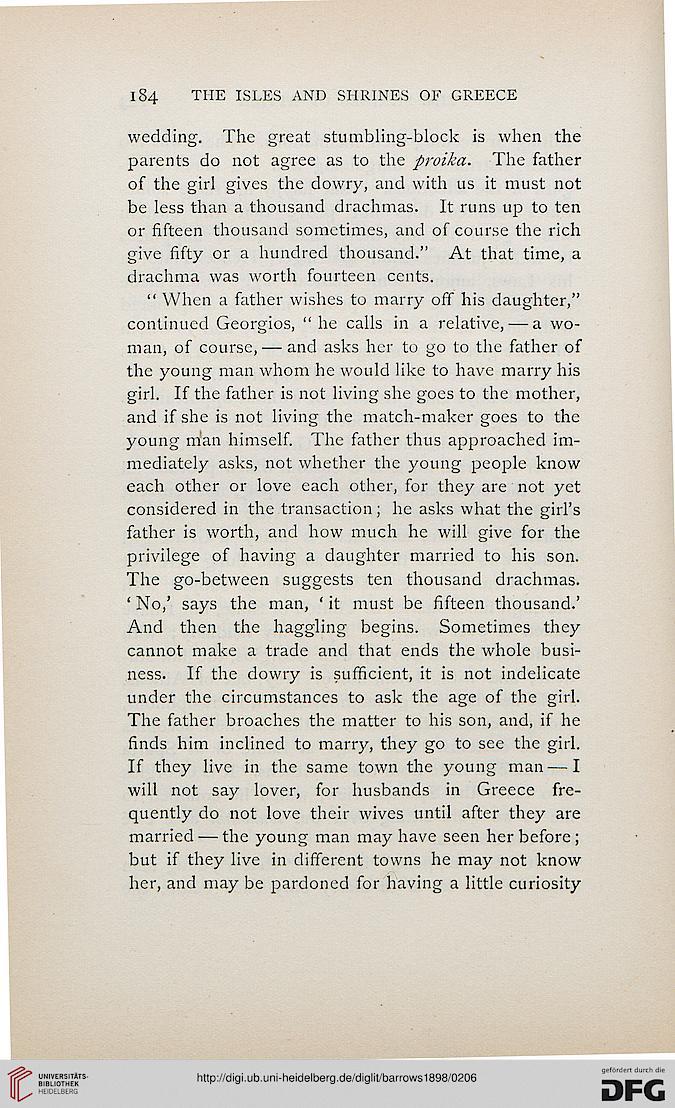 Information about OCR text
184 THE ISLES AND SHRINES OF GREECE

wedding. The great stumbling-block is when the
parents do not agree as to the proika. The father
of the girl gives the dowry, and with us it must not
be less than a thousand drachmas. It runs up to ten
or fifteen thousand sometimes, and of course the rich
give fifty or a hundred thousand." At that time, a
drachma was worth fourteen cents.

" When a father wishes to marry off his daughter,"
continued Georgios, " he calls in a relative, — a wo-
man, of course, —- and asks her to go to the father of
the young man whom he would like to have marry his
girl. If the father is not living she goes to the mother,
and if she is not living the match-maker goes to the
young man himself. The father thus approached im-
mediately asks, not whether the young people know
each other or love each other, for they are not yet
considered in the transaction; he asks what the girl's
father is worth, and how much he will give for the
privilege of having a daughter married to his son.
The go-between suggests ten thousand drachmas.
' No,' says the man, ' it must be fifteen thousand.'
And then the haggling begins. Sometimes they
cannot make a trade and that ends the whole busi-
ness. If the dowry is sufficient, it is not indelicate
under the circumstances to ask the age of the girl.
The father broaches the matter to his son, and, if he
finds him inclined to marry, they go to see the girl.
If they live in the same town the young man—I
will not say lover, for husbands in Greece fre-
quently do not love their wives until after they are
married — the young man may have seen her before ;
but if they live in different towns he may not know
her, and may be pardoned for having a little curiosity