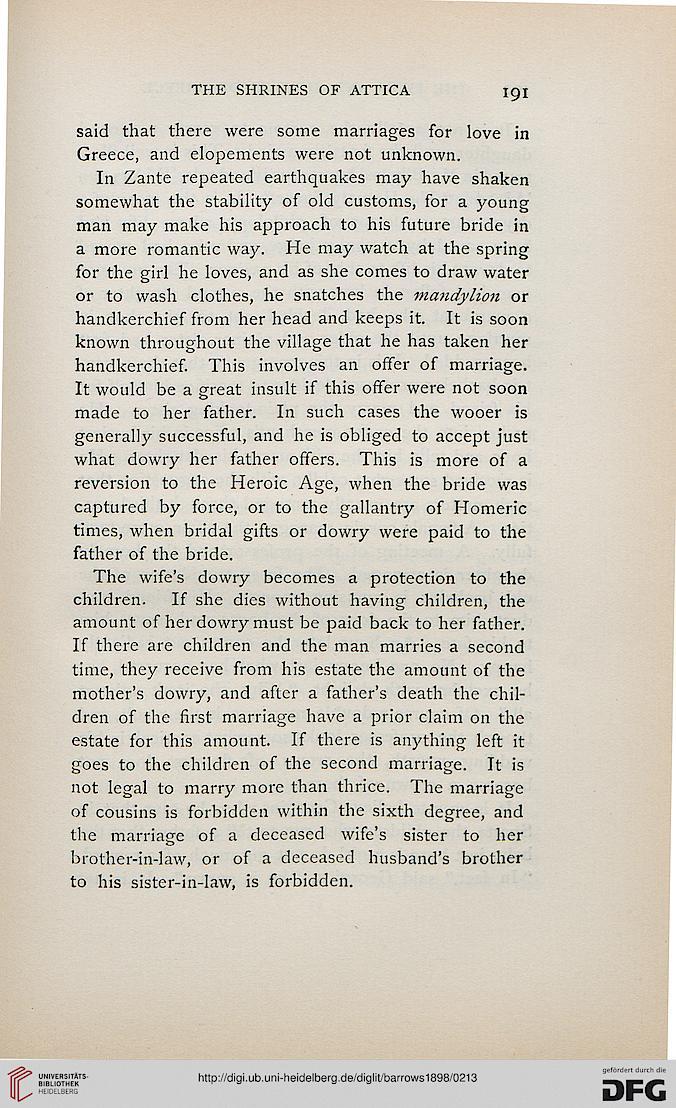 Information about OCR text
THE SHRINES OF ATTICA

said that there were some marriages for love in
Greece, and elopements were not unknown.

In Zante repeated earthquakes may have shaken
somewhat the stability of old customs, for a young
man may make his approach to his future bride in
a more romantic way. He may watch at the spring
for the girl he loves, and as she comes to draw water
or to wash clothes, he snatches the maudylion or
handkerchief from her head and keeps it. It is soon
known throughout the village that he has taken her
handkerchief. This involves an offer of marriage.
It would be a great insult if this offer were not soon
made to her father. In such cases the wooer is
generally successful, and he is obliged to accept just
what dowry her father offers. This is more of a
reversion to the Heroic Age, when the bride was
captured by force, or to the gallantry of Homeric
times, when bridal gifts or dowry were paid to the
father of the bride.

The wife's dowry becomes a protection to the
children. If she dies without having children, the
amount of her dowry must be paid back to her father.
If there are children and the man marries a second
time, they receive from his estate the amount of the
mother's dowry, and after a father's death the chil-
dren of the first marriage have a prior claim on the
estate for this amount. If there is anything left it
goes to the children of the second marriage. It is
not legal to marry more than thrice. The marriage
of cousins is forbidden within the sixth degree, and
the marriage of a deceased wife's sister to her
brother-in-law, or of a deceased husband's brother
to his sister-in-law, is forbidden.