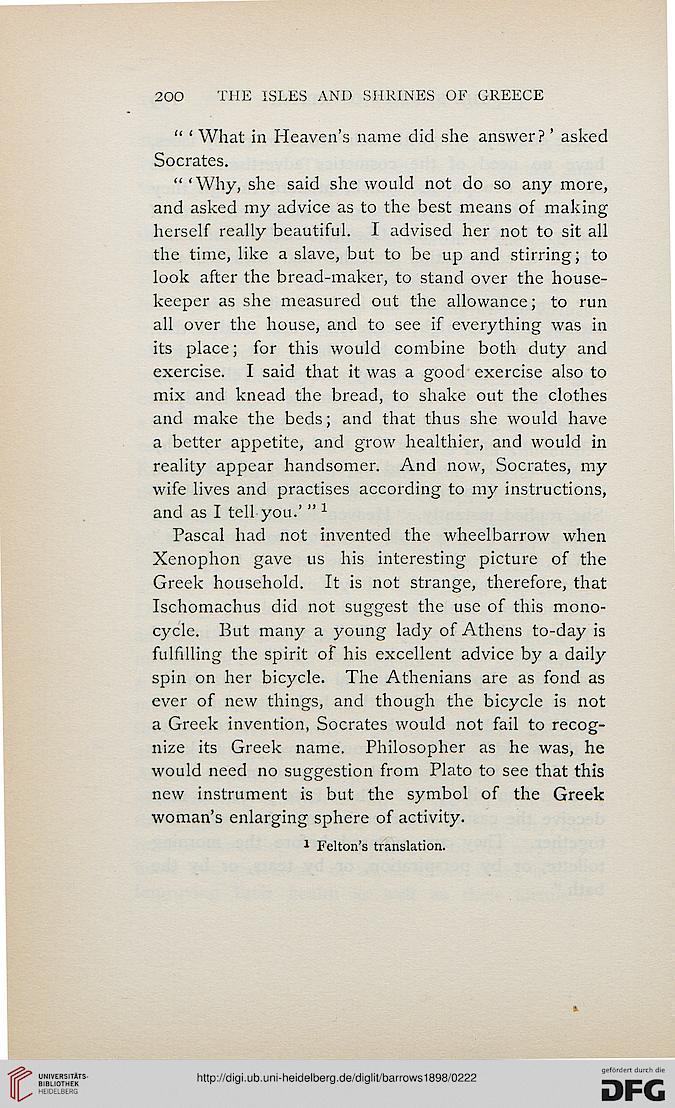 Information about OCR text
200 THE ISLES AND SHRINES OF GREECE

" ' What in Heaven's name did she answer? ' asked
Socrates.

" ' Why, she said she would not do so any more,
and asked my advice as to the best means of making
herself really beautiful. I advised her not to sit all
the time, like a slave, but to be up and stirring; to
look after the bread-maker, to stand over the house-
keeper as she measured out the allowance; to run
all over the house, and to see if everything was in
its place; for this would combine both duty and
exercise. I said that it was a good exercise also to
mix and knead the bread, to shake out the clothes
and make the beds; and that thus she would have
a better appetite, and grow healthier, and would in
reality appear handsomer. And now, Socrates, my
wife lives and practises according to my instructions,
and as I tell you.' " 1

Pascal had not invented the wheelbarrow when
Xenophon gave us his interesting picture of the
Greek household. It is not strange, therefore, that
Ischomachus did not suggest the use of this mono-
cycle. But many a young lady of Athens to-day is
fulfilling the spirit of his excellent advice by a daily
spin on her bicycle. The Athenians are as fond as
ever of new things, and though the bicycle is not
a Greek invention, Socrates would not fail to recog-
nize its Greek name. Philosopher as he was, he
would need no suggestion from Plato to see that this
new instrument is but the symbol of the Greek
woman's enlarging sphere of activity.
1 Felton's translation.