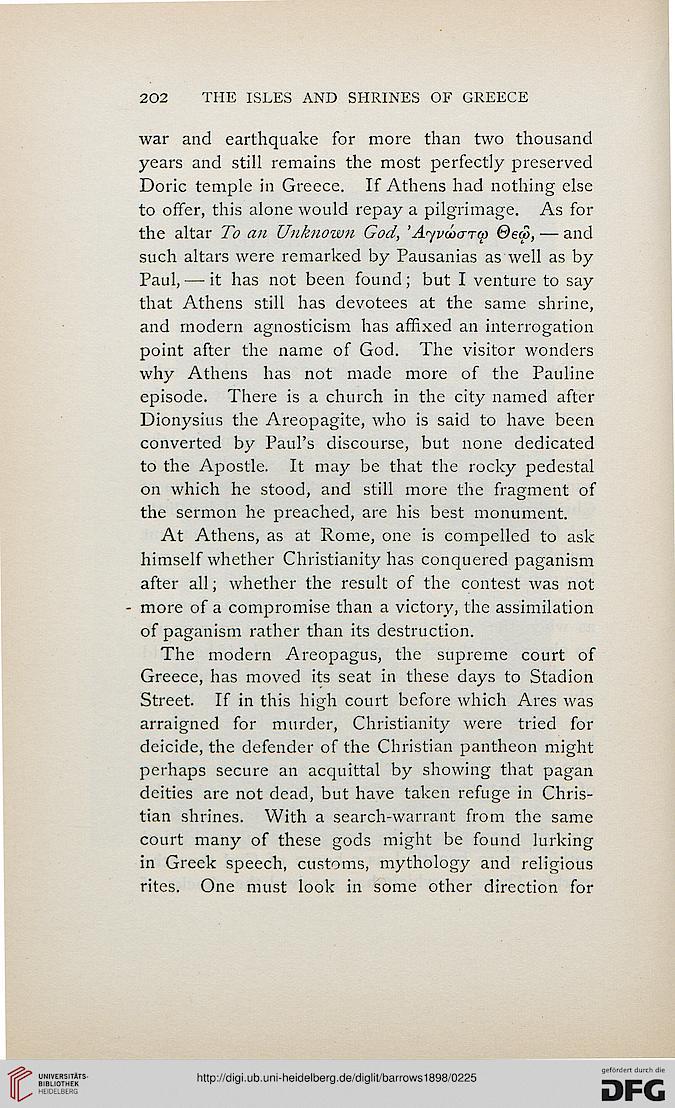 Information about OCR text
202 THE ISLES AND SHRINES OF GREECE

war and earthquake for more than two thousand
years and still remains the most perfectly preserved
Doric temple in Greece. If Athens had nothing else
to offer, this alone would repay a pilgrimage. As for
the altar To an Unknown God, 'Ayvcoaro) ©em, — and
such altars were remarked by Pausanias as well as by
Paul, — it has not been found; but I venture to say
that Athens still has devotees at the same shrine,
and modern agnosticism has affixed an interrogation
point after the name of God. The visitor wonders
why Athens has not made more of the Pauline
episode. There is a church in the city named after
Dionysius the Areopagite, who is said to have been
converted by Paul's discourse, but none dedicated
to the Apostle. It may be that the rocky pedestal
on which he stood, and still more the fragment of
the sermon he preached, are his best monument.

At Athens, as at Rome, one is compelled to ask
himself whether Christianity has conquered paganism
after all; whether the result of the contest was not
more of a compromise than a victory, the assimilation
of paganism rather than its destruction.

The modern Areopagus, the supreme court of
Greece, has moved its seat in these days to Stadion
Street. If in this high court before which Ares was
arraigned for murder, Christianity were tried for
deicide, the defender of the Christian pantheon might
perhaps secure an acquittal by showing that pagan
deities are not dead, but have taken refuge in Chris-
tian shrines. With a search-warrant from the same
court many of these gods might be found lurking
in Greek speech, customs, mythology and religious
rites. One must look in some other direction for