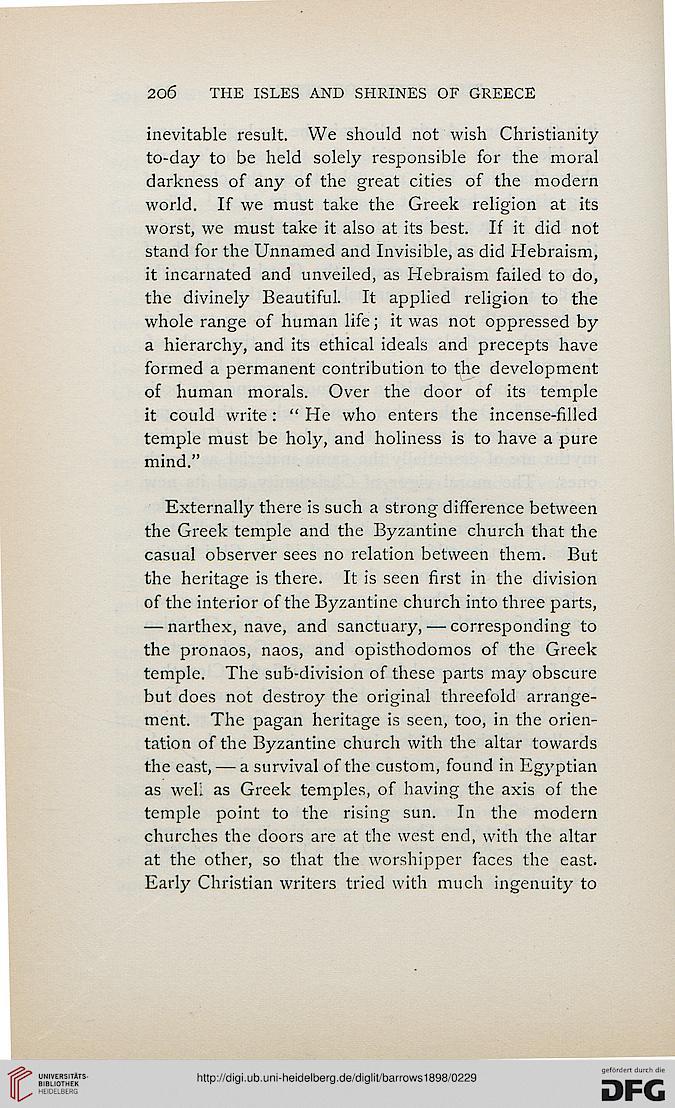 Information about OCR text
206 THE ISLES AND SHRINES OF GREECE

inevitable result. We should not wish Christianity
to-day to be held solely responsible for the moral
darkness of any of the great cities of the modern
world. If we must take the Greek religion at its
worst, we must take it also at its best. If it did not
stand for the Unnamed and Invisible, as did Hebraism,
it incarnated and unveiled, as Hebraism failed to do,
the divinely Beautiful. It applied religion to the
whole range of human life; it was not oppressed by
a hierarchy, and its ethical ideals and precepts have
formed a permanent contribution to the development
of human morals. Over the door of its temple
it could write: " He who enters the incense-filled
temple must be holy, and holiness is to have a pure
mind."

Externally there is such a strong difference between
the Greek temple and the Byzantine church that the
casual observer sees no relation between them. But
the heritage is there. It is seen first in the division
of the interior of the Byzantine church into three parts,
— narthex, nave, and sanctuary, — corresponding to
the pronaos, naos, and opisthodomos of the Greek
temple. The sub-division of these parts may obscure
but does not destroy the original threefold arrange-
ment. The pagan heritage is seen, too, in the orien-
tation of the Byzantine church with the altar towards
the cast, — a survival of the custom, found in Egyptian
as well as Greek temples, of having the axis of the
temple point to the rising sun. In the modern
churches the doors are at the west end, with the altar
at the other, so that the worshipper faces the east.
Early Christian writers tried with much ingenuity to