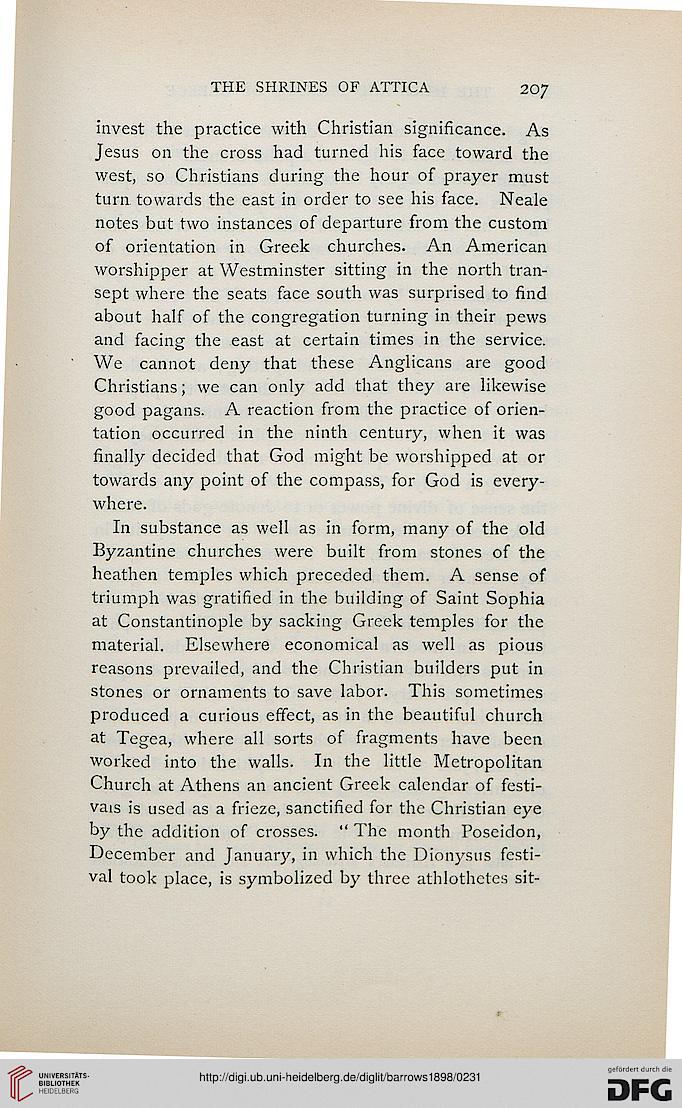 Information about OCR text
THE SHRINES OF ATTICA 207

invest the practice with Christian significance. As
Jesus on the cross had turned his face toward the
west, so Christians during the hour of prayer must
turn towards the east in order to see his face. Neale
notes but two instances of departure from the custom
of orientation in Greek churches. An American
worshipper at Westminster sitting in the north tran-
sept where the seats face south was surprised to find
about half of the congregation turning in their pews
and facing the east at certain times in the service.
We cannot deny that these Anglicans are good
Christians; we can only add that they are likewise
good pagans. A reaction from the practice of orien-
tation occurred in the ninth century, when it was
finally decided that God might be worshipped at or
towards any point of the compass, for God is every-
where.

In substance as well as in form, many of the old
Byzantine churches were built from stones of the
heathen temples which preceded them. A sense of
triumph was gratified in the building of Saint Sophia
at Constantinople by sacking Greek temples for the
material. Elsewhere economical as well as pious
reasons prevailed, and the Christian builders put in
stones or ornaments to save labor. This sometimes
produced a curious effect, as in the beautiful church
at Tegea, where all sorts of fragments have been
worked into the walls. In the little Metropolitan
Church at Athens an ancient Greek calendar of festi-
vals is used as a frieze, sanctified for the Christian eye
by the addition of crosses. " The month Poseidon,
December and January, in which the Dionysus festi-
val took place, is symbolized by three athlothetes sit-