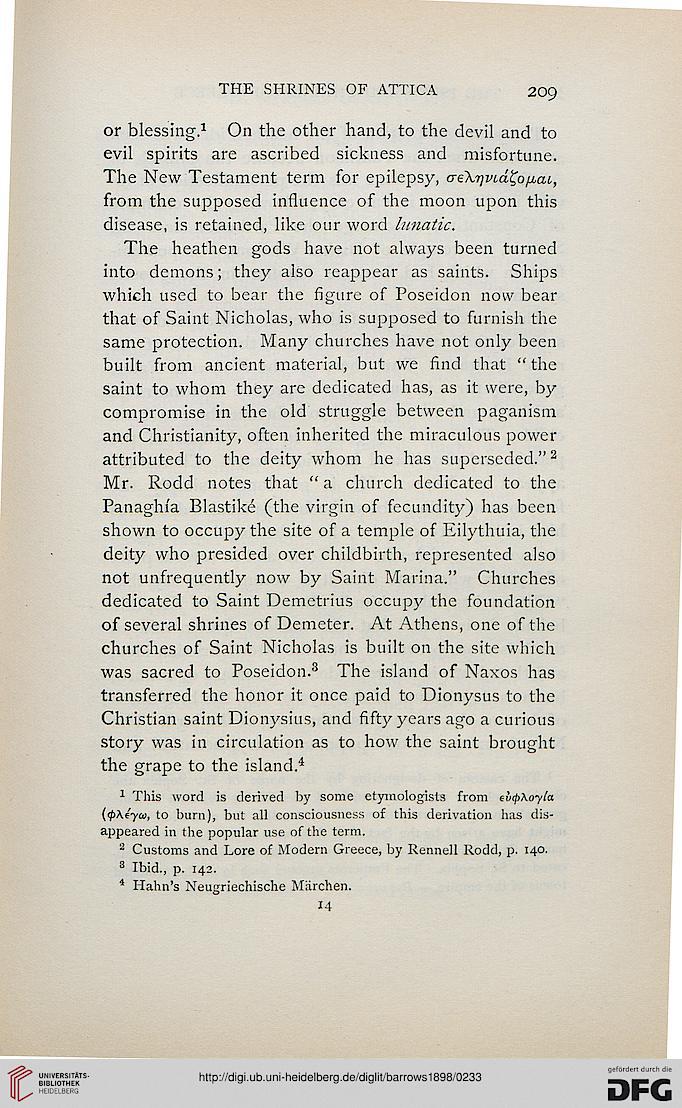 Information about OCR text
THE SHRINES OF ATTICA 209

or blessing.1 On the other hand, to the devil and to
evil spirits are ascribed sickness and misfortune.
The New Testament term for epilepsy, (re\7]vid£o/Acu,
from the supposed influence of the moon upon this
disease, is retained, like our word lunatic.

The heathen gods have not always been turned
into demons; they also reappear as saints. Ships
which used to bear the figure of Poseidon now bear
that of Saint Nicholas, who is supposed to furnish the
same protection. Many churches have not only been
built from ancient material, but we find that " the
saint to whom they are dedicated has, as it were, by
compromise in the old struggle between paganism
and Christianity, often inherited the miraculous power
attributed to the deity whom he has superseded."2
Mr. Rodd notes that " a church dedicated to the
Panaghfa Blastike (the virgin of fecundity) has been
shown to occupy the site of a temple of Eilythuia, the
deity who presided over childbirth, represented also
not unfrequently now by Saint Marina." Churches
dedicated to Saint Demetrius occupy the foundation
of several shrines of Demeter. At Athens, one of the
churches of Saint Nicholas is built on the site which
was sacred to Poseidon.3 The island of Naxos has
transferred the honor it once paid to Dionysus to the
Christian saint Dionysius, and fifty years ago a curious
story was in circulation as to how the saint brought
the grape to the island.4

1 This word is derived by some etymologists from e!>cp\oy(a
(<j>\eya, to burn), but all consciousness of this derivation has dis-
appeared in the popular use of the term.