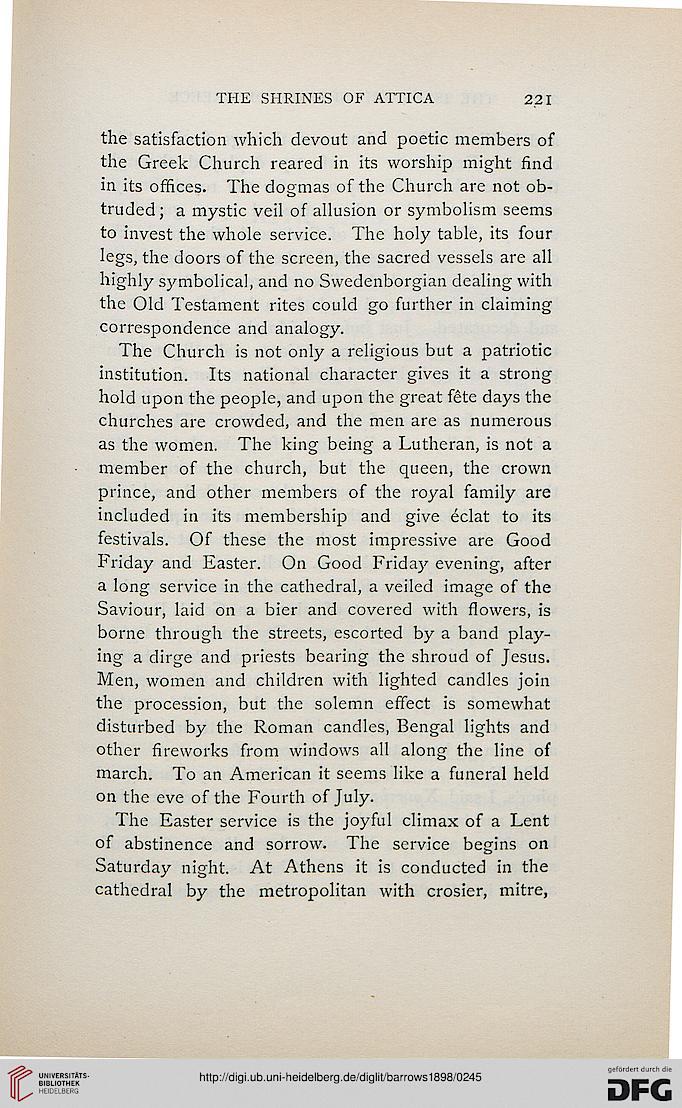 Information about OCR text
THE SHRINES OF ATTICA 221

the satisfaction which devout and poetic members of
the Greek Church reared in its worship might find
in its offices. The dogmas of the Church are not ob-
truded; a mystic veil of allusion or symbolism seems
to invest the whole service. The holy table, its four
legs, the doors of the screen, the sacred vessels are all
highly symbolical, and no Swedenborgian dealing with
the Old Testament rites could go further in claiming
correspondence and analogy.

The Church is not only a religious but a patriotic
institution. Its national character gives it a strong
hold upon the people, and upon the great fete days the
churches are crowded, and the men are as numerous
as the women. The king being a Lutheran, is not a
member of the church, but the queen, the crown
prince, and other members of the royal family are
included in its membership and give eclat to its
festivals. Of these the most impressive are Good
Friday and Easter. On Good Friday evening, after
a long service in the cathedral, a veiled image of the
Saviour, laid on a bier and covered with flowers, is
borne through the streets, escorted by a band play-
ing a dirge and priests bearing the shroud of Jesus.
Men, women and children with lighted candles join
the procession, but the solemn effect is somewhat
disturbed by the Roman candles, Bengal lights and
other fireworks from windows all along the line of
march. To an American it seems like a funeral held
on the eve of the Fourth of July.

The Easter service is the joyful climax of a Lent
of abstinence and sorrow. The service begins on
Saturday night. At Athens it is conducted in the
cathedral by the metropolitan with crosier, mitre,