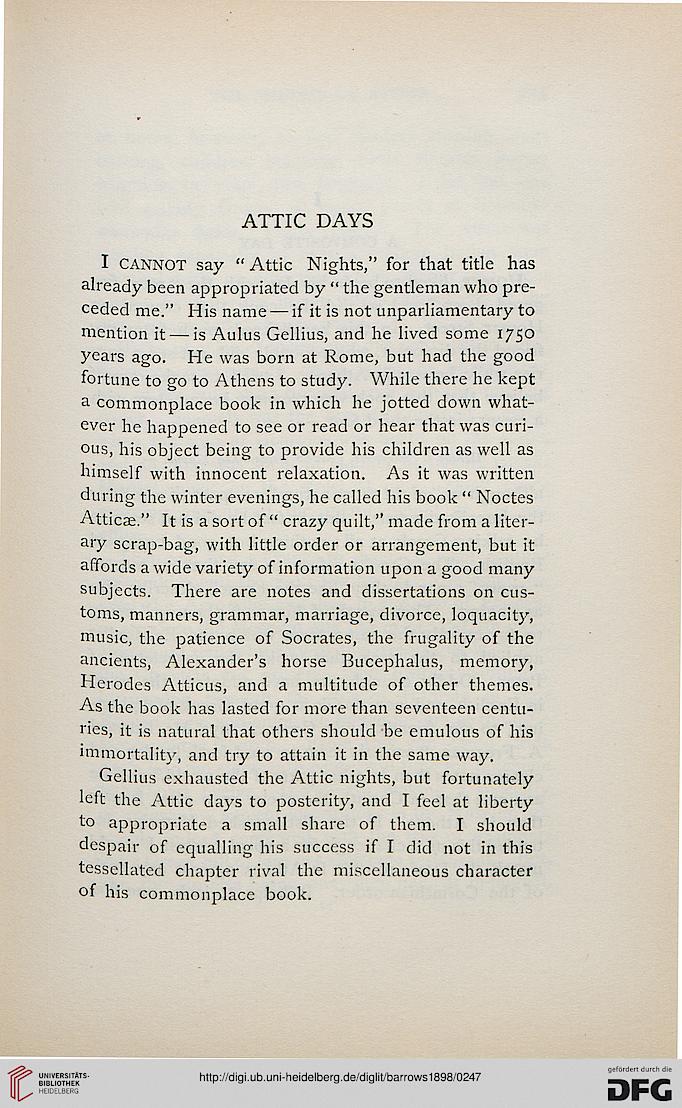 I cannot say "Attic Nights," for that title has
already been appropriated by " the gentleman who pre-
ceded me." His name — if it is not unparliamentary to
mention it — is Aulus Gellius, and he lived some 1750
years ago. He was born at Rome, but had the good
fortune to go to Athens to study. While there he kept
a commonplace book in which he jotted down what-
ever he happened to see or read or hear that was curi-
ous, his object being to provide his children as well as
himself with innocent relaxation. As it was written
during the winter evenings, he called his book " Noctes
Atticse." It is a sort of" crazy quilt," made from a liter-
ary scrap-bag, with little order or arrangement, but it
affords a wide variety of information upon a good many
subjects. There are notes and dissertations on cus-
toms, manners, grammar, marriage, divorce, loquacity,
music, the patience of Socrates, the frugality of the
ancients, Alexander's horse Bucephalus, memory,
Herodes Atticus, and a multitude of other themes.
As the book has lasted for more than seventeen centu-
ries, it is natural that others should be emulous of his
immortality, and try to attain it in the same way.

Gellius exhausted the Attic nights, but fortunately
left the Attic days to posterity, and I feel at liberty
to appropriate a small share of them. I should
despair of equalling his success if I did not in this
tessellated chapter rival the miscellaneous character
of his commonplace book.