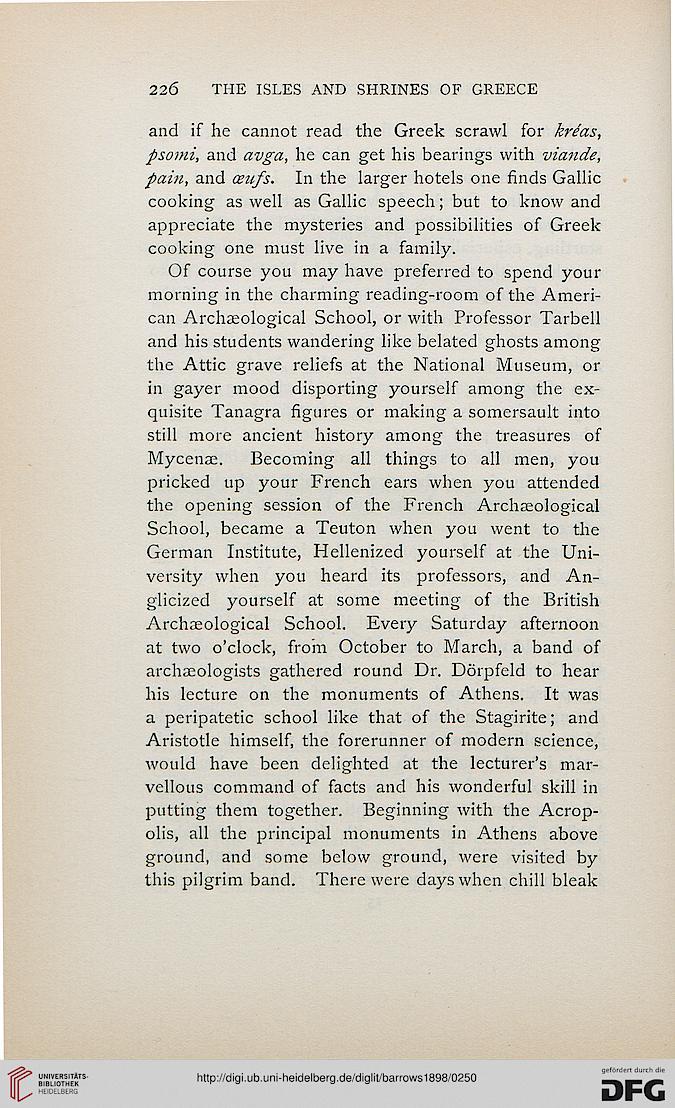 Information about OCR text
226 THE ISLES AND SHRINES OF GREECE

and if he cannot read the Greek scrawl for kreas,
psomi, and avga, he can get his bearings with viande,
pain, and ceufs. In the larger hotels one finds Gallic
cooking as well as Gallic speech; but to know and
appreciate the mysteries and possibilities of Greek
cooking one must live in a family.

Of course you may have preferred to spend your
morning in the charming reading-room of the Ameri-
can Archaeological School, or with Professor Tarbell
and his students wandering like belated ghosts among
the Attic grave reliefs at the National Museum, or
in gayer mood disporting yourself among the ex-
quisite Tanagra figures or making a somersault into
still more ancient history among the treasures of
Mycenae. Becoming all things to all men, you
pricked up your French ears when you attended
the opening session of the French Archaeological
School, became a Teuton when you went to the
German Institute, Hellenized yourself at the Uni-
versity when you heard its professors, and An-
glicized yourself at some meeting of the British
Archaeological School. Every Saturday afternoon
at two o'clock, from October to March, a band of
archaeologists gathered round Dr. Dorpfcld to hear
his lecture on the monuments of Athens. It was
a peripatetic school like that of the Stagirite; and
Aristotle himself, the forerunner of modern science,
would have been delighted at the lecturer's mar-
vellous command of facts and his wonderful skill in
putting them together. Beginning with the Acrop-
olis, all the principal monuments in Athens above
ground, and some below ground, were visited by
this pilgrim band. There were days when chill bleak