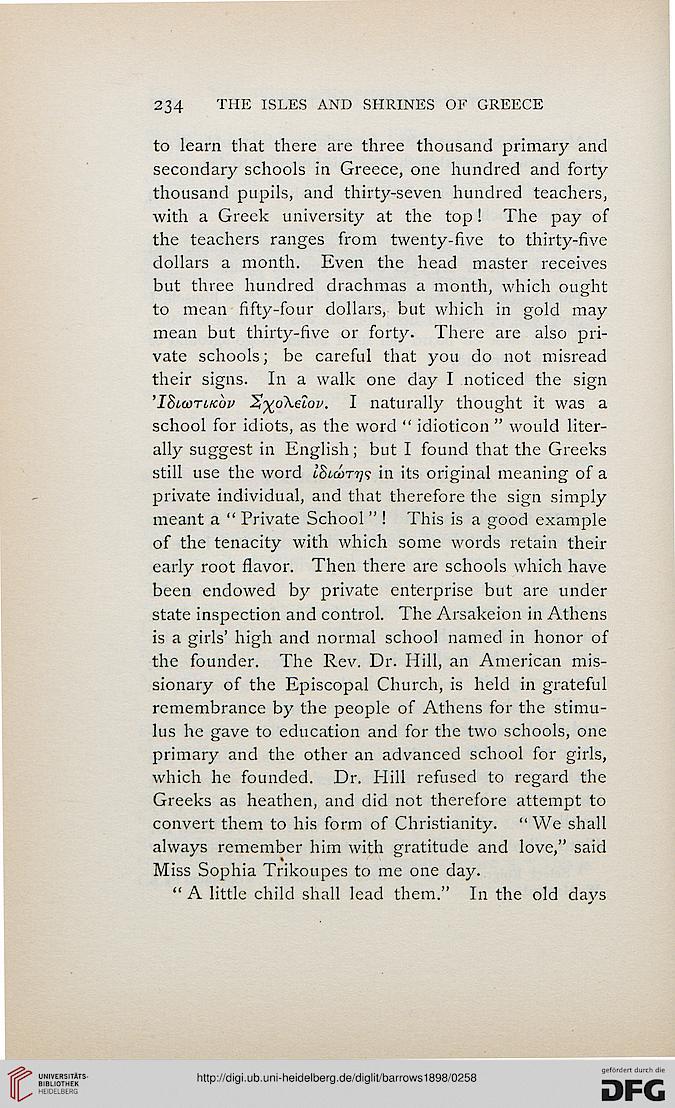 Information about OCR text
234 THE ISLES AND SHRINES OF GREECE

to learn that there are three thousand primary and
secondary schools in Greece, one hundred and forty
thousand pupils, and thirty-seven hundred teachers,
with a Greek university at the top! The pay of
the teachers ranges from twenty-five to thirty-five
dollars a month. Even the head master receives
but three hundred drachmas a month, which ought
to mean fifty-four dollars, but which in gold may
mean but thirty-five or forty. There are also pri-
vate schools; be careful that you do not misread
their signs. In a walk one day I noticed the sign
'ISccotikuv .^oAetW. I naturally thought it was a
school for idiots, as the word " idioticon " would liter-
ally suggest in English; but I found that the Greeks
still use the word t'Swur?;? in its original meaning of a
private individual, and that therefore the sign simply
meant a " Private School " ! This is a good example
of the tenacity with which some words retain their
early root flavor. Then there are schools which have
been endowed by private enterprise but are under
state inspection and control. The Arsakeion in Athens
is a girls' high and normal school named in honor of
the founder. The Rev. Dr. Hill, an American mis-
sionary of the Episcopal Church, is held in grateful
remembrance by the people of Athens for the stimu-
lus he gave to education and for the two schools, one
primary and the other an advanced school for girls,
which he founded. Dr. Hill refused to regard the
Greeks as heathen, and did not therefore attempt to
convert them to his form of Christianity. " We shall
always remember him with gratitude and love," said
Miss Sophia Trikoupes to me one day.

" A little child shall lead them." In the old davs