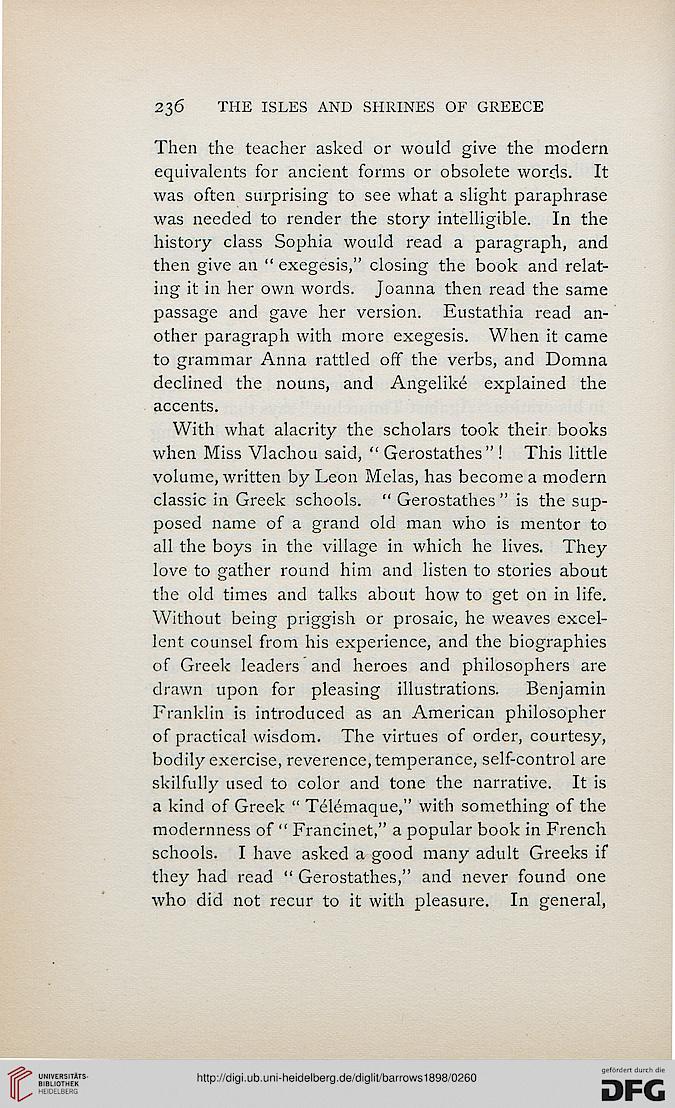 Information about OCR text
236 THE ISLES AND SHRINES OF GREECE

Then the teacher asked or would give the modern
equivalents for ancient forms or obsolete words. It
was often surprising to see what a slight paraphrase
was needed to render the story intelligible. In the
history class Sophia would read a paragraph, and
then give an " exegesis," closing the book and relat-
ing it in her own words. Joanna then read the same
passage and gave her version. Eustathia read an-
other paragraph with more exegesis. When it came
to grammar Anna rattled off the verbs, and Domna
declined the nouns, and Angelike explained the
accents.

With what alacrity the scholars took their books
when Miss Vlachou said, " Gerostathes" ! This little
volume, written by Leon Mclas, has become a modern
classic in Greek schools. " Gerostathes " is the sup-
posed name of a grand old man who is mentor to
all the boys in the village in which he lives. They
love to gather round him and listen to stories about
the old times and talks about how to get on in life.
Without being priggish or prosaic, he weaves excel-
lent counsel from his experience, and the biographies
of Greek leaders and heroes and philosophers are
drawn upon for pleasing illustrations. Benjamin
Franklin is introduced as an American philosopher
of practical wisdom. The virtues of order, courtesy,
bodily exercise, reverence, temperance, self-control are
skilfully used to color and tone the narrative. It is
a kind of Greek " Telemaque," with something of the
modernness of " Francinet," a popular book in French
schools. I have asked a good many adult Greeks if
they had read " Gerostathes," and never found one
who did not recur to it with pleasure. In general,