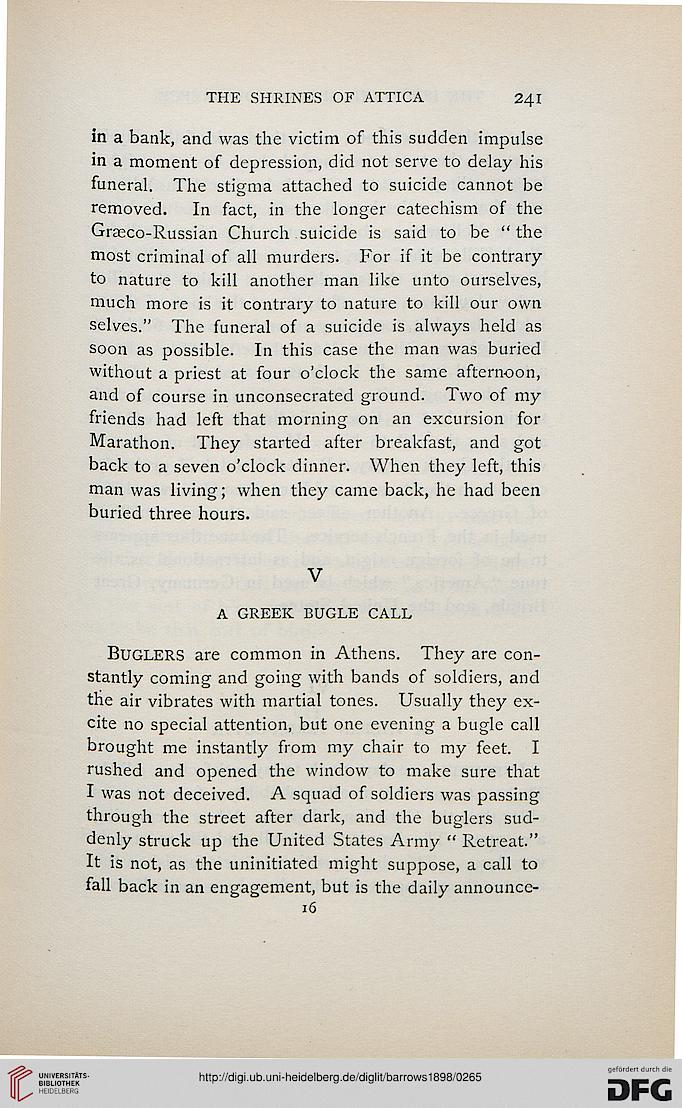 Information about OCR text
THE SHRINES OF ATTICA 241

in a bank, and was the victim of this sudden impulse
in a moment of depression, did not serve to delay his
funeral. The stigma attached to suicide cannot be
removed. In fact, in the longer catechism of the
Grseco-Russian Church suicide is said to be " the
most criminal of all murders. For if it be contrary
to nature to kill another man like unto ourselves,
much more is it contrary to nature to kill our own
selves." The funeral of a suicide is always held as
soon as possible. In this case the man was buried
without a priest at four o'clock the same afternoon,
and of course in unconsecrated ground. Two of my
friends had left that morning on an excursion for
Marathon. They started after breakfast, and got
back to a seven o'clock dinner. When they left, this
man was living; when they came back, he had been
buried three hours.

BUGLERS are common in Athens. They are con-
stantly coming and going with bands of soldiers, and
the air vibrates with martial tones. Usually they ex-
cite no special attention, but one evening a bugle call
brought me instantly from my chair to my feet. I
rushed and opened the window to make sure that
I was not deceived. A squad of soldiers was passing
through the street after dark, and the buglers sud-
denly struck up the United States Army " Retreat."
It is not, as the uninitiated might suppose, a call to
fall back in an engagement, but is the daily announce-