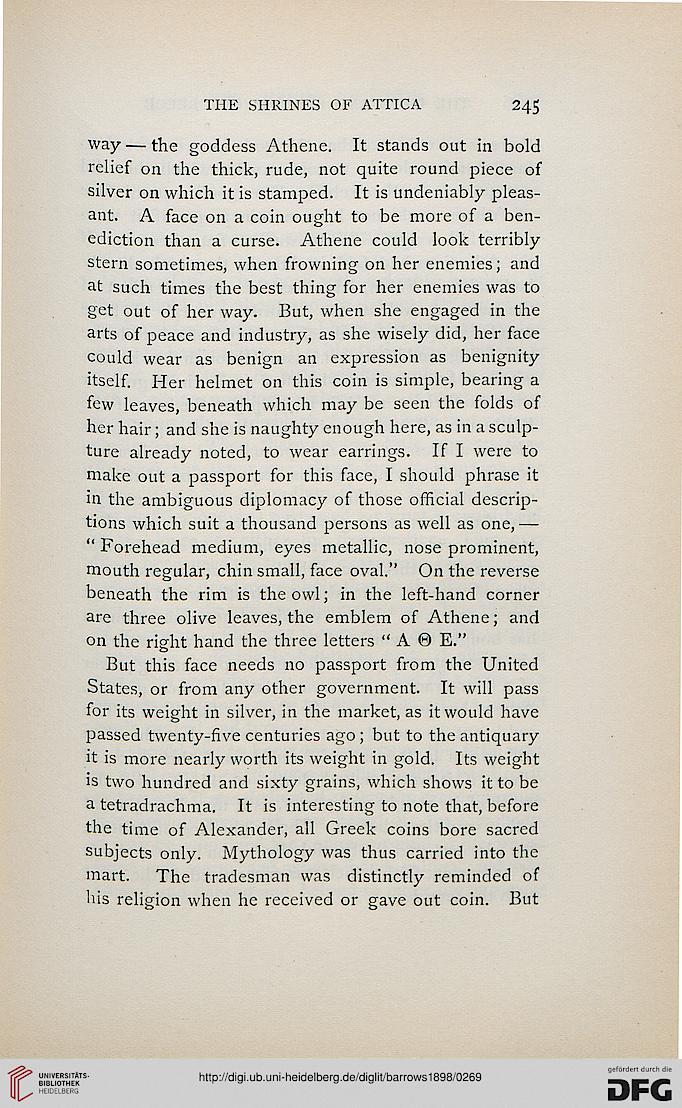 Information about OCR text
THE SHRINES OF ATTICA 245

way — the goddess Athene. It stands out in bold
relief on the thick, rude, not quite round piece of
silver on which it is stamped. It is undeniably pleas-
ant. A face on a coin ought to be more of a ben-
ediction than a curse. Athene could look terribly
stern sometimes, when frowning on her enemies; and
at such times the best thing for her enemies was to
get out of her way. But, when she engaged in the
arts of peace and industry, as she wisely did, her face
could wear as benign an expression as benignity
itself. Her helmet on this coin is simple, bearing a
few leaves, beneath which may be seen the folds of
her hair; and she is naughty enough here, as in a sculp-
ture already noted, to wear earrings. If I were to
make out a passport for this face, I should phrase it
in the ambiguous diplomacy of those official descrip-
tions which suit a thousand persons as well as one,—
" Forehead medium, eyes metallic, nose prominent,
mouth regular, chin small, face oval." On the reverse
beneath the rim is the owl; in the left-hand corner
are three olive leaves, the emblem of Athene; and
on the right hand the three letters "A © E."

But this face needs no passport from the United
States, or from any other government. It will pass
for its weight in silver, in the market, as it would have
passed twenty-five centuries ago ; but to the antiquary
it is more nearly worth its weight in gold. Its weight
is two hundred and sixty grains, which shows it to be
a tetradrachma. It is interesting to note that, before
the time of Alexander, all Greek coins bore sacred
subjects only. Mythology was thus carried into the
mart. The tradesman was distinctly reminded of
his religion when he received or gave out coin. But