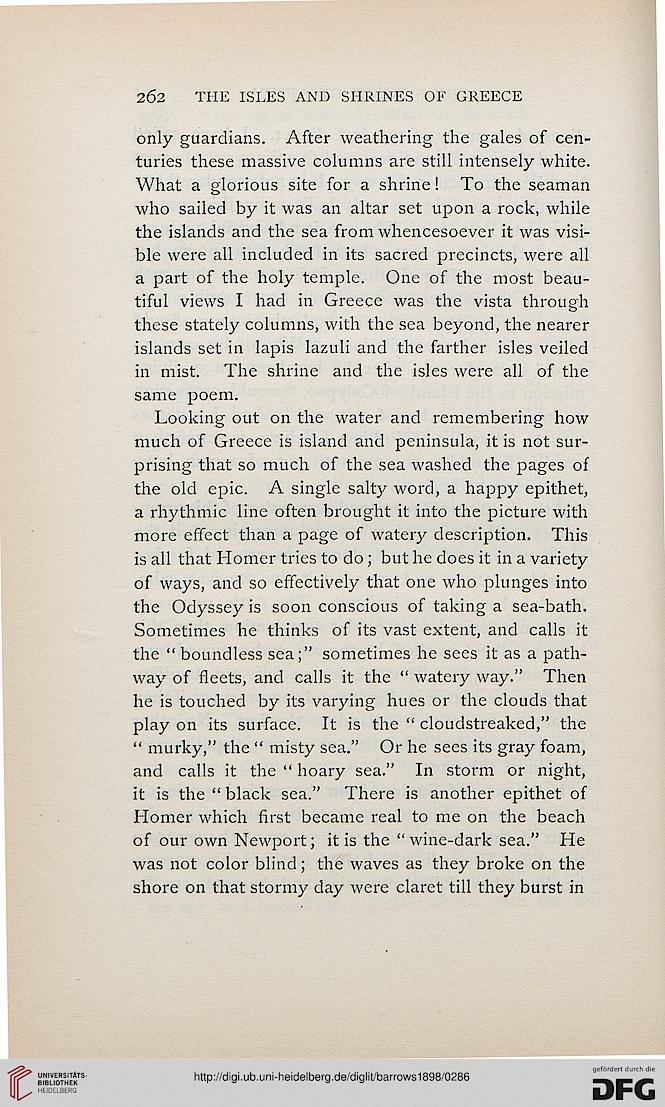 Information about OCR text
262 THE ISLES AND SHRINES OF GREECE

only guardians. After weathering the gales of cen-
turies these massive columns are still intensely white.
What a glorious site for a shrine! To the seaman
who sailed by it was an altar set upon a rock, while
the islands and the sea from whencesoever it was visi-
ble were all included in its sacred precincts, were all
a part of the holy temple. One of the most beau-
tiful views I had in Greece was the vista through
these stately columns, with the sea beyond, the nearer
islands set in lapis lazuli and the farther isles veiled
in mist. The shrine and the isles were all of the
same poem.

Looking out on the water and remembering how
much of Greece is island and peninsula, it is not sur-
prising that so much of the sea washed the pages of
the old epic. A single salty word, a happy epithet,
a rhythmic line often brought it into the picture with
more effect than a page of watery description. This
is all that Homer tries to do; but he does it in a variety
of ways, and so effectively that one who plunges into
the Odyssey is soon conscious of taking a sea-bath.
Sometimes he thinks of its vast extent, and calls it
the " boundless sea;" sometimes he sees it as a path-
way of fleets, and calls it the " watery way." Then
he is touched by its varying hues or the clouds that
play on its surface. It is the " cloudstreaked," the
" murky," the " misty sea." Or he sees its gray foam,
and calls it the " hoary sea." In storm or night,
it is the " black sea." There is another epithet of
Homer which first became real to me on the beach
of our own Newport; it is the " wine-dark sea." He
was not color blind; the waves as they broke on the
shore on that stormy day were claret till they burst in