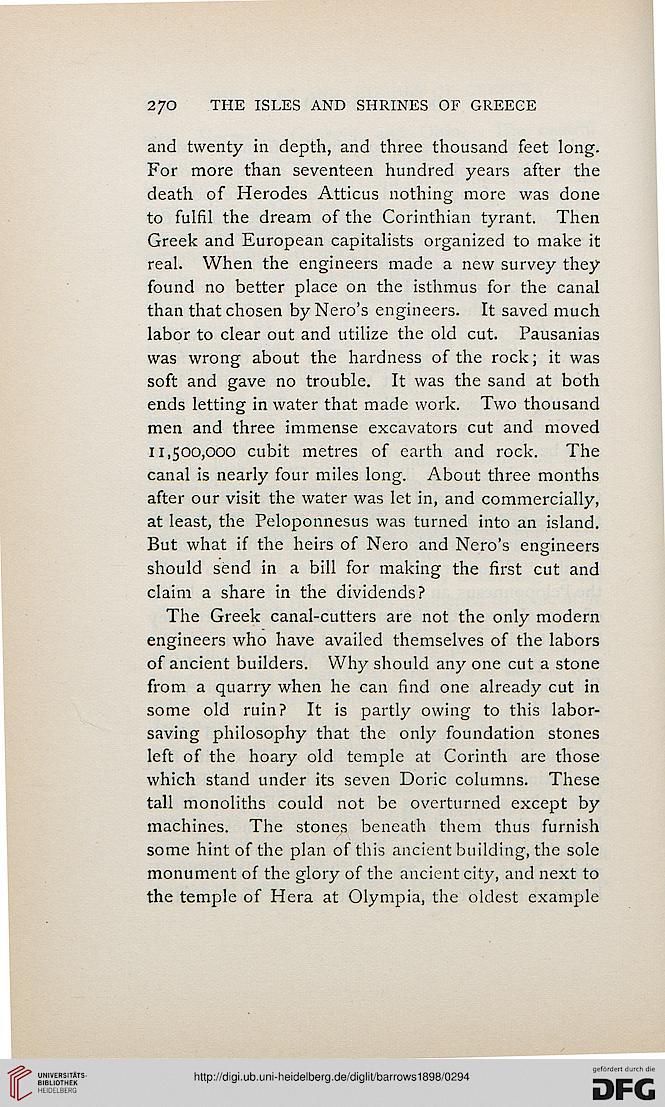 Information about OCR text
270 THE ISLES AND SHRINES OF GREECE

and twenty in depth, and three thousand feet long.
For more than seventeen hundred years after the
death of Herodes Atticus nothing more was done
to fulfil the dream of the Corinthian tyrant. Then
Greek and European capitalists organized to make it
real. When the engineers made a new survey they
found no better place on the isthmus for the canal
than that chosen by Nero's engineers. It saved much
labor to clear out and utilize the old cut. Pausanias
was wrong about the hardness of the rock; it was
soft and gave no trouble. It was the sand at both
ends letting in water that made work. Two thousand
men and three immense excavators cut and moved
11,500,000 cubit metres of earth and rock. The
canal is nearly four miles long. About three months
after our visit the water was let in, and commercially,
at least, the Peloponnesus was turned into an island.
But what if the heirs of Nero and Nero's engineers
should send in a bill for making the first cut and
claim a share in the dividends?

The Greek canal-cutters are not the only modern
engineers who have availed themselves of the labors
of ancient builders. Why should any one cut a stone
from a quarry when he can find one already cut in
some old ruin? It is partly owing to this labor-
saving philosophy that the only foundation stones
left of the hoary old temple at Corinth are those
which stand under its seven Doric columns. These
tall monoliths could not be overturned except by
machines. The stones beneath them thus furnish
some hint of the plan of this ancient building, the sole
monument of the glory of the ancient city, and next to
the temple of Hera at Olympia, the oldest example