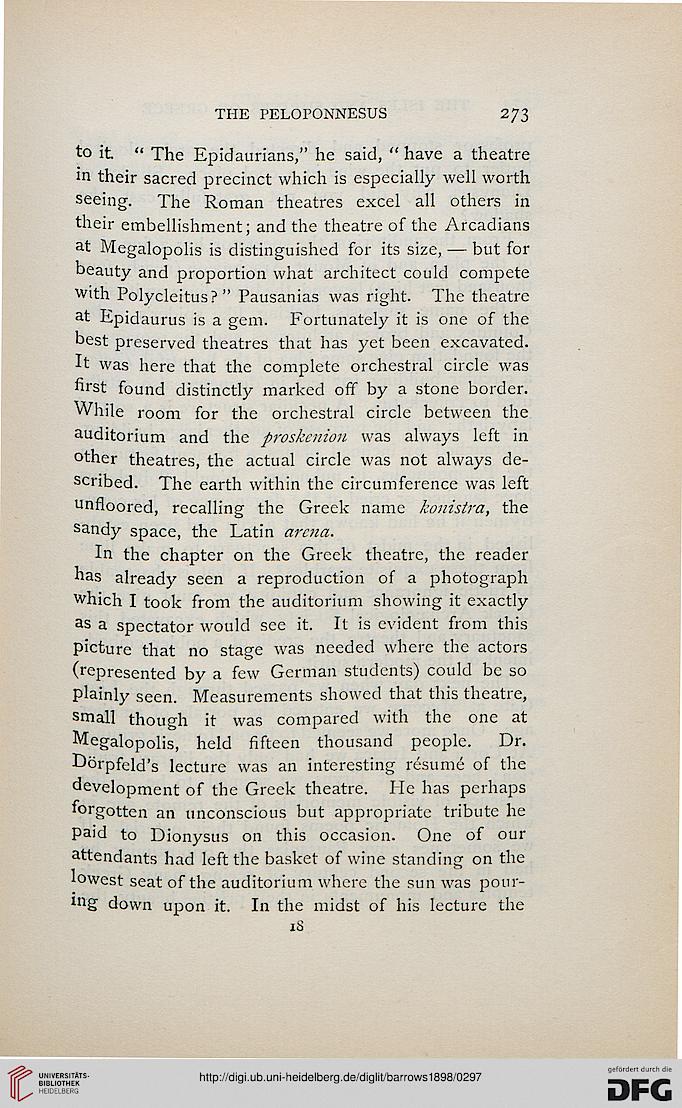 Information about OCR text
THE PELOPONNESUS 273

to it. " The Epidaurians," he said, " have a theatre
in their sacred precinct which is especially well worth
seeing. The Roman theatres excel all others in
their embellishment; and the theatre of the Arcadians
at Megalopolis is distinguished for its size, — but for
beauty and proportion what architect could compete
with Polycleitus? " Pausanias was right. The theatre
at Epidaurus is a gem. Fortunately it is one of the
best preserved theatres that has yet been excavated.
it was here that the complete orchestral circle was
first found distinctly marked off by a stone border.
While room for the orchestral circle between the
auditorium and the proskenion was always left in
°ther theatres, the actual circle was not always de-
scribed. The earth within the circumference was left
unfloored, recalling the Greek name konistra, the
sandy space, the Latin arena.

In the chapter on the Greek theatre, the reader
has already seen a reproduction of a photograph
which I took from the auditorium showing it exactly
as a spectator would see it. It is evident from this
picture that no stage was needed where the actors
(represented by a few German students) could be so
plainly seen. Measurements showed that this theatre,
small though it was compared with the one at
Megalopolis, held fifteen thousand people. Dr.
Dorpfeld's lecture was an interesting resume of the
development of the Greek theatre. He has perhaps
forgotten an unconscious but appropriate tribute he
paid to Dionysus on this occasion. One of our
attendants had left the basket of wine standing on the
lowest seat of the auditorium where the sun was pour-
lng down upon it. In the midst of his lecture the