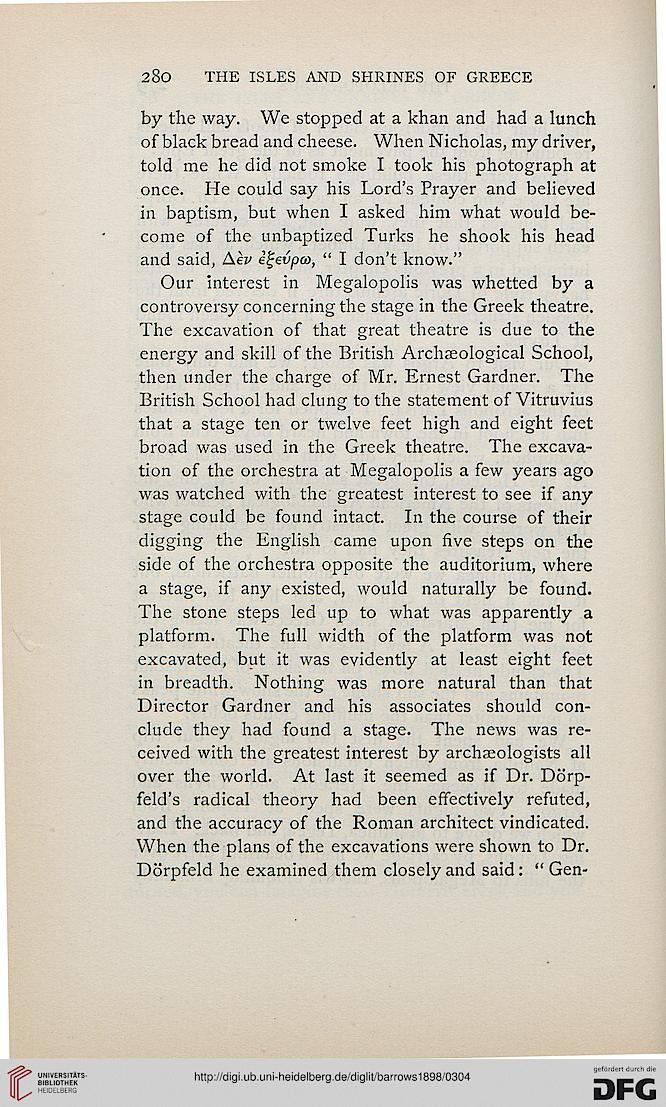 Information about OCR text
280 THE ISLES AND SHRINES OF GREECE

by the way. We stopped at a khan and had a lunch
of black bread and cheese. When Nicholas, my driver,
told me he did not smoke I took his photograph at
once. He could say his Lord's Prayer and believed
in baptism, but when I asked him what would be-
come of the unbaptized Turks he shook his head
and said, Aev itjevpa), " I don't know."

Our interest in Megalopolis was whetted by a
controversy concerning the stage in the Greek theatre.
The excavation of that great theatre is due to the
energy and skill of the British Archaeological School,
then under the charge of Mr. Ernest Gardner. The
British School had clung to the statement of Vitruvius
that a stage ten or twelve feet high and eight feet
broad was used in the Greek theatre. The excava-
tion of the orchestra at Megalopolis a few years ago
was watched with the greatest interest to see if any
stage could be found intact. In the course of their
digging the English came upon five steps on the
side of the orchestra opposite the auditorium, where
a stage, if any existed, would naturally be found.
The stone steps led up to what was apparently a
platform. The full width of the platform was not
excavated, but it was evidently at least eight feet
in breadth. Nothing was more natural than that
Director Gardner and his associates should con-
clude they had found a stage. The news was re-
ceived with the greatest interest by archaeologists all
over the world. At last it seemed as if Dr. Dorp-
feld's radical theory had been effectively refuted,
and the accuracy of the Roman architect vindicated.
When the plans of the excavations were shown to Dr.
Dorpfeld he examined them closely and said: " Gen-