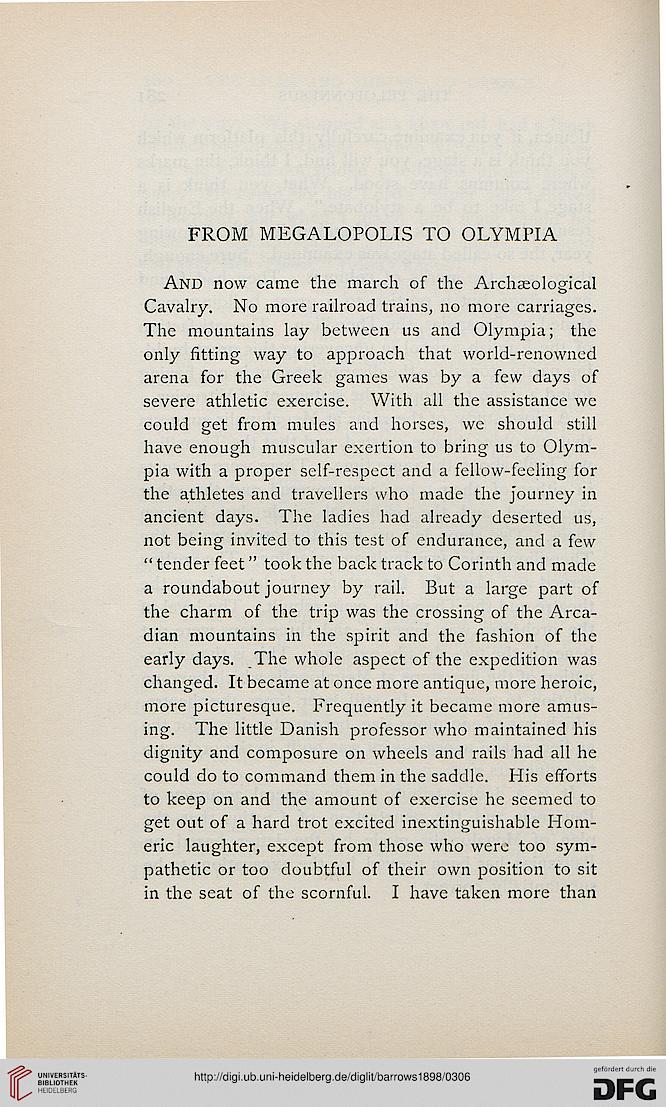 Information about OCR text
FROM MEGALOPOLIS TO OLYMPIA

And now came the march of the Archaeological
Cavalry. No more railroad trains, no more carriages.
The mountains lay between us and Olympia; the
only fitting way to approach that world-renowned
arena for the Greek games was by a few days of
severe athletic exercise. With all the assistance we
could get from mules and horses, we should still
have enough muscular exertion to bring us to Olym-
pia with a proper self-respect and a fellow-feeling for
the athletes and travellers who made the journey in
ancient days. The ladies had already deserted us,
not being invited to this test of endurance, and a few
" tender feet" took the back track to Corinth and made
a roundabout journey by rail. But a large part of
the charm of the trip was the crossing of the Arca-
dian mountains in the spirit and the fashion of the
early days. The whole aspect of the expedition was
changed. It became at once more antique, more heroic,
more picturesque. Frequently it became more amus-
ing. The little Danish professor who maintained his
dignity and composure on wheels and rails had all he
could do to command them in the saddle. His efforts
to keep on and the amount of exercise he seemed to
get out of a hard trot excited inextinguishable Hom-
eric laughter, except from those who were too sym-
pathetic or too doubtful of their own position to sit
in the scat of the scornful. I have taken more than