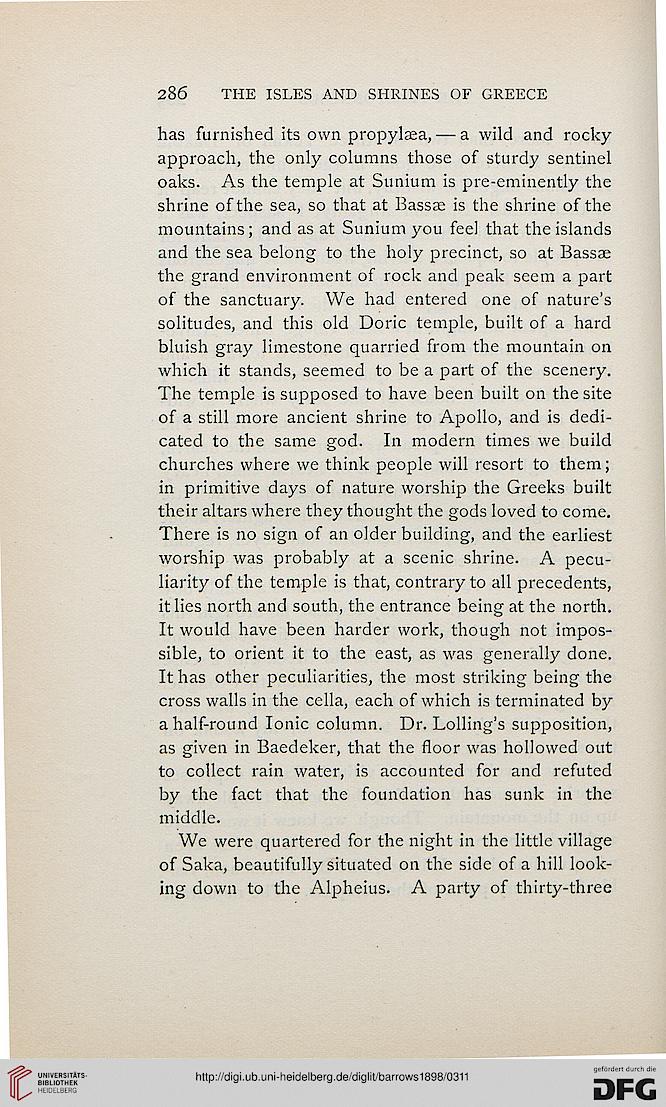 Information about OCR text
286 THE ISLES AND SHRINES OF GREECE

has furnished its own propylsea, — a wild and rocky
approach, the only columns those of sturdy sentinel
oaks. As the temple at Sunium is pre-eminently the
shrine of the sea, so that at Bassa; is the shrine of the
mountains; and as at Sunium you feel that the islands
and the sea belong to the holy precinct, so at Bassse
the grand environment of rock and peak seem a part
of the sanctuary. We had entered one of nature's
solitudes, and this old Doric temple, built of a hard
bluish gray limestone quarried from the mountain on
which it stands, seemed to be a part of the scenery.
The temple is supposed to have been built on the site
of a still more ancient shrine to Apollo, and is dedi-
cated to the same god. In modern times we build
churches where we think people will resort to them;
in primitive days of nature worship the Greeks built
their altars where they thought the gods loved to come.
There is no sign of an older building, and the earliest
worship was probably at a scenic shrine. A pecu-
liarity of the temple is that, contrary to all precedents,
it lies north and south, the entrance being at the north.
It would have been harder work, though not impos-
sible, to orient it to the east, as was generally done.
It has other peculiarities, the most striking being the
cross walls in the cella, each of which is terminated by
a half-round Ionic column. Dr. Lolling's supposition,
as given in Baedeker, that the floor was hollowed out
to collect rain water, is accounted for and refuted
by the fact that the foundation has sunk in the
middle.

We were quartered for the night in the little village
of Saka, beautifully situated on the side of a hill look-
ing down to the Alpheius. A party of thirty-three