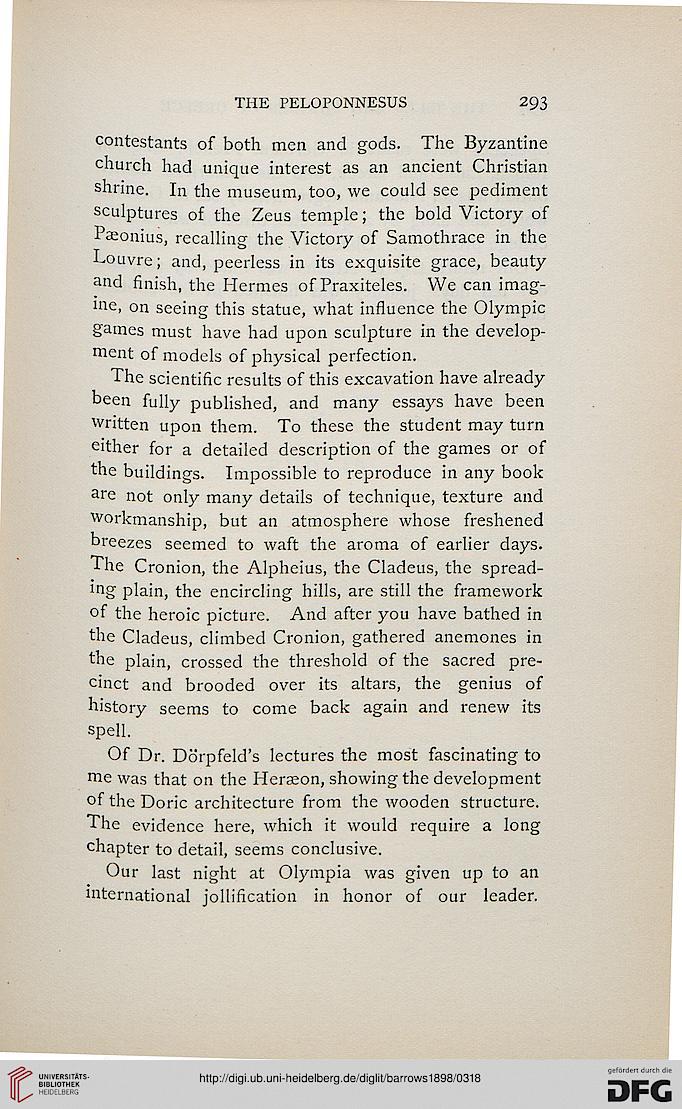 Information about OCR text
THE PELOPONNESUS 293

contestants of both men and gods. The Byzantine
church had unique interest as an ancient Christian
shrine. In the museum, too, we could see pediment
sculptures of the Zeus temple; the bold Victory of
Paaonius, recalling the Victory of Samothrace in the
Louvre; and, peerless in its exquisite grace, beauty
and finish, the Hermes of Praxiteles. We can imag-
me, on seeing this statue, what influence the Olympic
games must have had upon sculpture in the develop-
ment of models of physical perfection.

The scientific results of this excavation have already
been fully published, and many essays have been
written upon them. To these the student may turn
either for a detailed description of the games or of
the buildings. Impossible to reproduce in any book
are not only many details of technique, texture and
workmanship, but an atmosphere whose freshened
breezes seemed to waft the aroma of earlier days.
The Cronion, the Alpheius, the Cladeus, the spread-
ing plain, the encircling hills, are still the framework
of the heroic picture. And after you have bathed in
the Cladeus, climbed Cronion, gathered anemones in
the plain, crossed the threshold of the sacred pre-
cinct and brooded over its altars, the genius of
history seems to come back again and renew its
spell.

Of Dr. Ddrpfeld's lectures the most fascinating to
me was that on the Heraeon, showing the development
of the Doric architecture from the wooden structure.
The evidence here, which it would require a long
chapter to detail, seems conclusive.

Our last night at Olympia was given up to an
international jollification in honor of our leader.