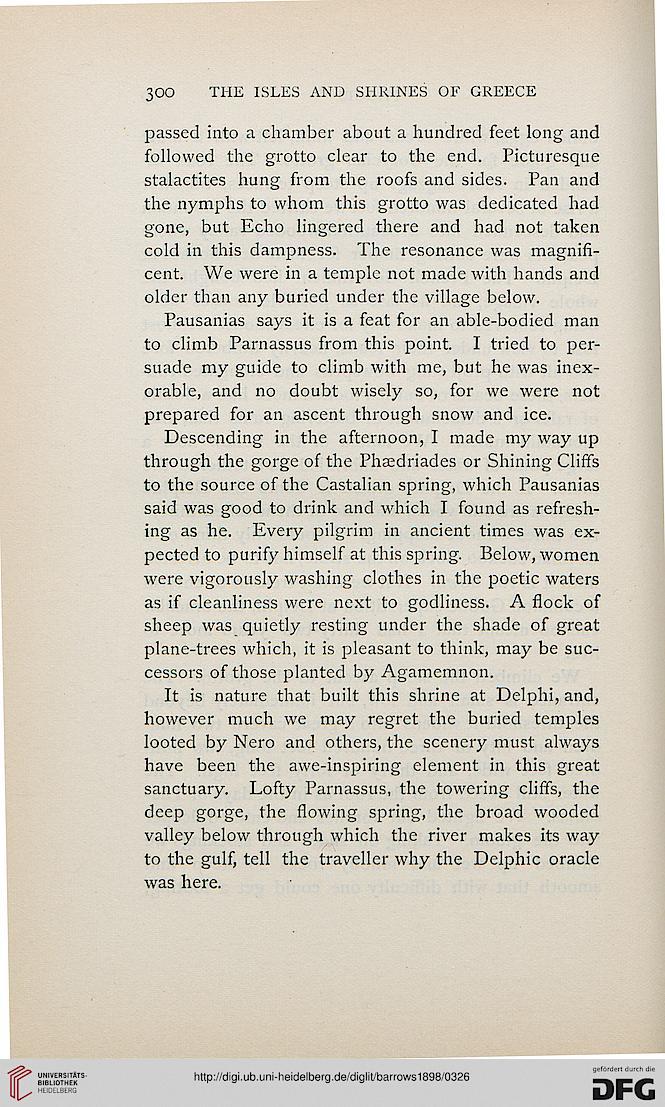 Information about OCR text
300 THE ISLES AND SHRINES OF GREECE

passed into a chamber about a hundred feet long and
followed the grotto clear to the end. Picturesque
stalactites hung from the roofs and sides. Pan and
the nymphs to whom this grotto was dedicated had
gone, but Echo lingered there and had not taken
cold in this dampness. The resonance was magnifi-
cent. We were in a temple not made with hands and
older than any buried under the village below.

Pausanias says it is a feat for an able-bodied man
to climb Parnassus from this point. I tried to per-
suade my guide to climb with me, but he was inex-
orable, and no doubt wisely so, for we were not
prepared for an ascent through snow and ice.

Descending in the afternoon, I made my way up
through the gorge of the Phaedriades or Shining Cliffs
to the source of the Castalian spring, which Pausanias
said was good to drink and which I found as refresh-
ing as he. Every pilgrim in ancient times was ex-
pected to purify himself at this spring. Below, women
were vigorously washing clothes in the poetic waters
as if cleanliness were next to godliness. A flock of
sheep was quietly resting under the shade of great
plane-trees which, it is pleasant to think, may be suc-
cessors of those planted by Agamemnon.

It is nature that built this shrine at Delphi, and,
however much we may regret the buried temples
looted by Nero and others, the scenery must always
have been the awe-inspiring clement in this great
sanctuary. Lofty Parnassus, the towering cliffs, the
deep gorge, the flowing spring, the broad wooded
valley below through which the river makes its way
to the gulf, tell the traveller why the Delphic oracle
was here.