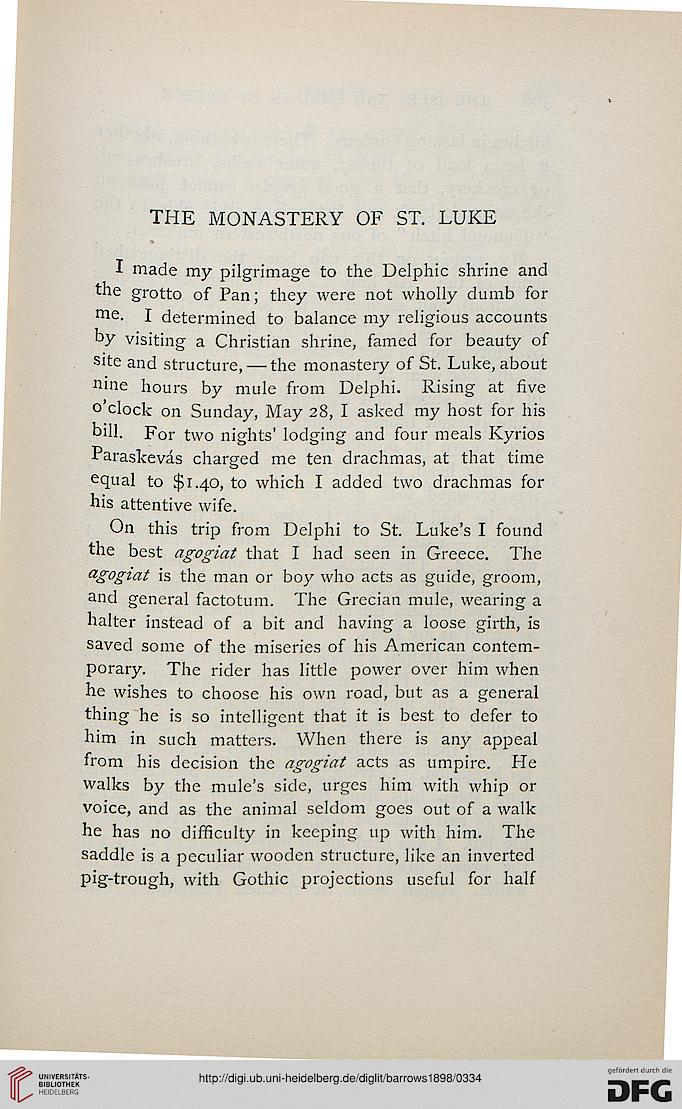 Information about OCR text
THE MONASTERY OF ST. LUKE

I made my pilgrimage to the Delphic shrine and
the grotto of Pan; they were not wholly dumb for
me- I determined to balance my religious accounts
Dy visiting a Christian shrine, famed for beauty of
site and structure, — the monastery of St. Luke, about
nine hours by mule from Delphi. Rising at five
o'clock on Sunday, May 28, I asked my host for his
"ill. For two nights' lodging and four meals Kyrios
Paraskevas charged me ten drachmas, at that time
equal to $1.40, to which I added two drachmas for
his attentive wife.

On this trip from Delphi to St. Luke's I found
the best agogiat that I had seen in Greece. The
agogiat is the man or boy who acts as guide, groom,
and general factotum. The Grecian mule, wearing a
halter instead of a bit and having a loose girth, is
saved some of the miseries of his American contem-
porary. The rider has little power over him when
he wishes to choose his own road, but as a general
thing he is so intelligent that it is best to defer to
him in such matters. When there is any appeal
from his decision the agogiat acts as umpire. He
walks by the mule's side, urges him with whip or
voice, and as the animal seldom goes out of a walk
he has no difficulty in keeping up with him. The
saddle is a peculiar wooden structure, like an inverted
pig-trough, with Gothic projections useful for half