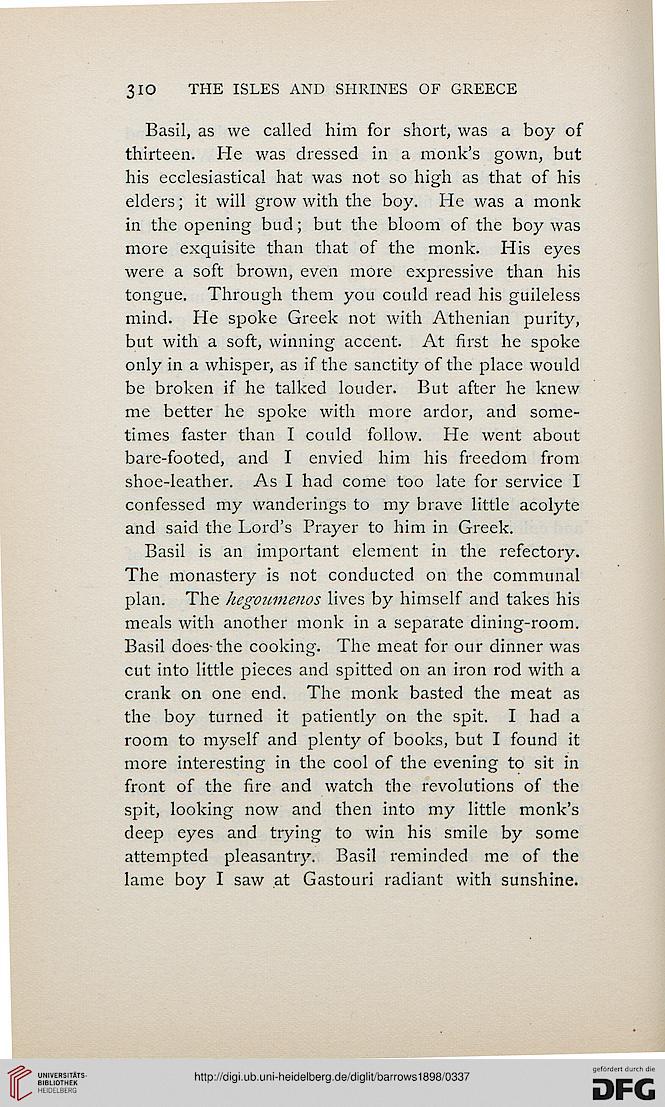 Information about OCR text
310 THE ISLES AND SHRINES OF GREECE

Basil, as we called him for short, was a boy of
thirteen. He was dressed in a monk's gown, but
his ecclesiastical hat was not so high as that of his
elders; it will grow with the boy. He was a monk
in the opening bud; but the bloom of the boy was
more exquisite than that of the monk. His eyes
were a soft brown, even more expressive than his
tongue. Through them you could read his guileless
mind. He spoke Greek not with Athenian purity,
but with a soft, winning accent. At first he spoke
only in a whisper, as if the sanctity of the place would
be broken if he talked louder. But after he knew
me better he spoke with more ardor, and some-
times faster than I could follow. He went about
bare-footed, and I envied him his freedom from
shoe-leather. As I had come too late for service I
confessed my wanderings to my brave little acolyte
and said the Lord's Prayer to him in Greek.

Basil is an important element in the refectory.
The monastery is not conducted on the communal
plan. The licgoumenos lives by himself and takes his
meals with another monk in a separate dining-room.
Basil does-the cooking. The meat for our dinner was
cut into little pieces and spitted on an iron rod with a
crank on one end. The monk basted the meat as
the boy turned it patiently on the spit. I had a
room to myself and plenty of books, but I found it
more interesting in the cool of the evening to sit in
front of the fire and watch the revolutions of the
spit, looking now and then into my little monk's
deep eyes and trying to win his smile by some
attempted pleasantry. Basil reminded me of the
lame boy I saw at Gastouri radiant with sunshine.