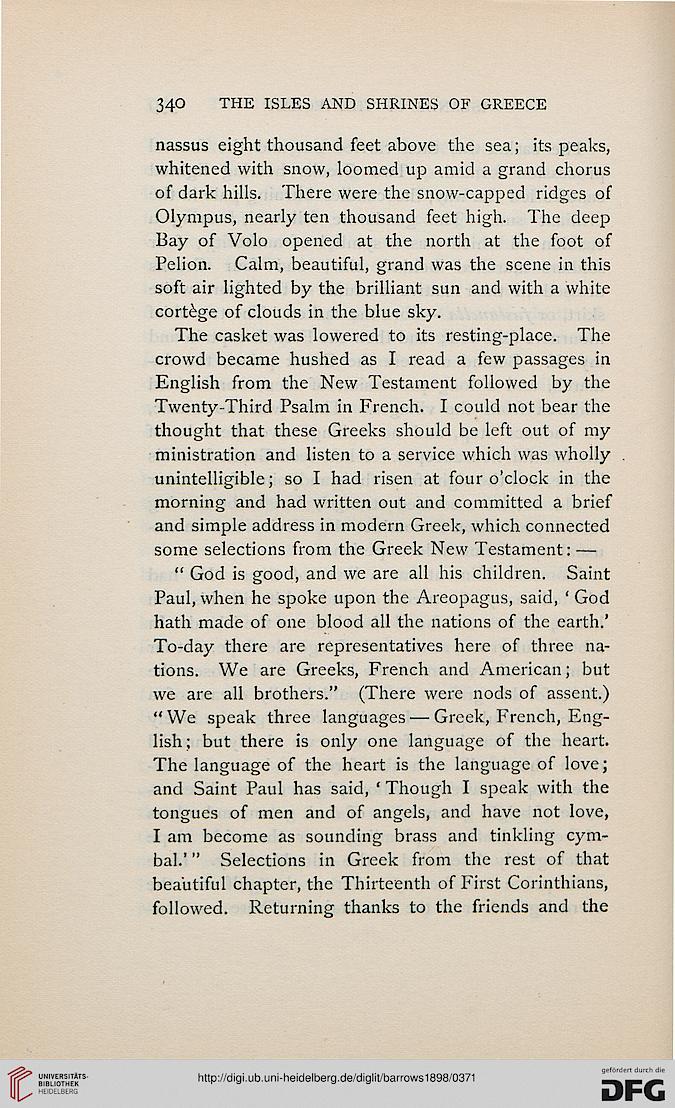 Information about OCR text
340 THE ISLES AND SHRINES OF GREECE

nassus eight thousand feet above the sea; its peaks,
whitened with snow, loomed up amid a grand chorus
of dark hills. There were the snow-capped ridges of
Olympus, nearly ten thousand feet high. The deep
Bay of Volo opened at the north at the foot of
Pelion. Calm, beautiful, grand was the scene in this
soft air lighted by the brilliant sun and with a white
cortege of clouds in the blue sky.

The casket was lowered to its resting-place. The
crowd became hushed as I read a few passages in
English from the New Testament followed by the
Twenty-Third Psalm in French. I could not bear the
thought that these Greeks should be left out of my
ministration and listen to a service which was wholly
unintelligible; so I had risen at four o'clock in the
morning and had written out and committed a brief
and simple address in modern Greek, which connected
some selections from the Greek New Testament: —

" God is good, and we are all his children. Saint
Paul, when he spoke upon the Areopagus, said, ' God
hath made of one blood all the nations of the earth.'
To-day there are representatives here of three na-
tions. We are Greeks, French and American; but
we are all brothers." (There were nods of assent.)
"We speak three languages — Greek, French, Eng-
lish; but there is only one language of the heart.
The language of the heart is the language of love;
and Saint Paul has said, ' Though I speak with the
tongues of men and of angels, and have not love,
I am become as sounding brass and tinkling cym-
bal.' " Selections in Greek from the rest of that
beautiful chapter, the Thirteenth of First Corinthians,
followed. Returning thanks to the friends and the