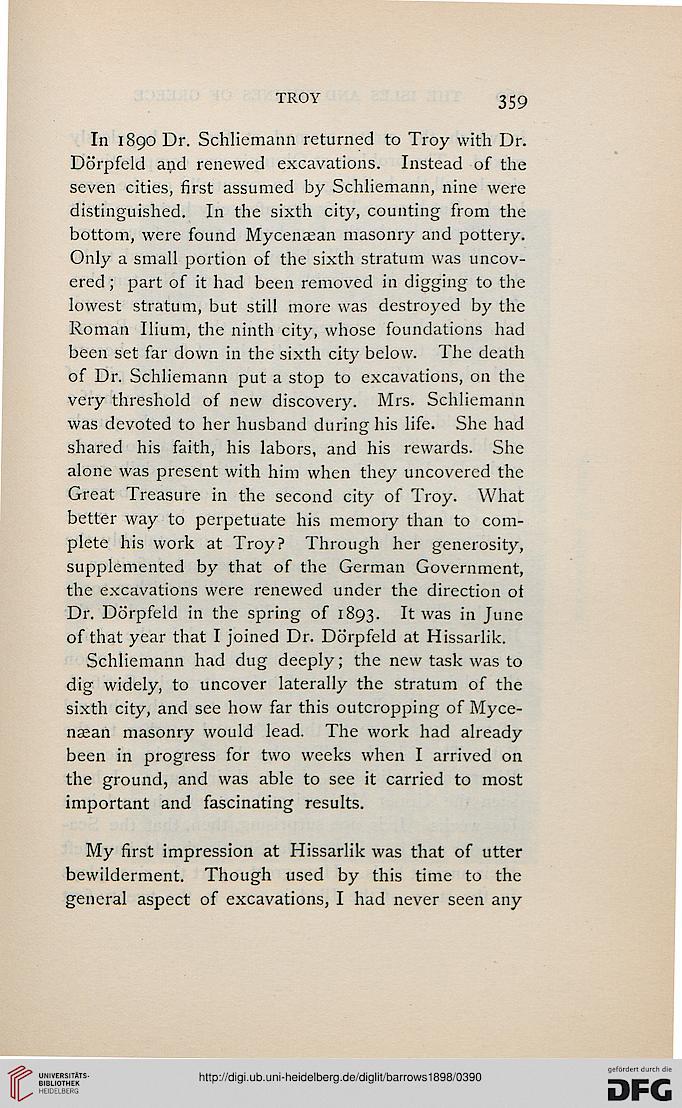 In 1890 Dr. Schliemann returned to Troy with Dr.
Dorpfeld and renewed excavations. Instead of the
seven cities, first assumed by Schliemann, nine were
distinguished. In the sixth city, counting from the
bottom, were found Mycensean masonry and pottery.
Only a small portion of the sixth stratum was uncov-
ered ; part of it had been removed in digging to the
lowest stratum, but still more was destroyed by the
Roman Ilium, the ninth city, whose foundations had
been set far down in the sixth city below. The death
of Dr. Schliemann put a stop to excavations, on the
very threshold of new discovery. Mrs. Schliemann
was devoted to her husband during his life. She had
shared his faith, his labors, and his rewards. She
alone was present with him when they uncovered the
Great Treasure in the second city of Troy. What
better way to perpetuate his memory than to com-
plete his work at Troy? Through her generosity,
supplemented by that of the German Government,
the excavations were renewed under the direction ot
Dr. Dorpfeld in the spring of 1893. It was in June
of that year that I joined Dr. Dorpfeld at Hissarlik.

Schliemann had dug deeply; the new task was to
dig widely, to uncover laterally the stratum of the
sixth city, and see how far this outcropping of Myce-
naean masonry would lead. The work had already
been in progress for two weeks when I arrived on
the ground, and was able to see it carried to most
important and fascinating results.

My first impression at Hissarlik was that of utter
bewilderment. Though used by this time to the
general aspect of excavations, I had never seen any