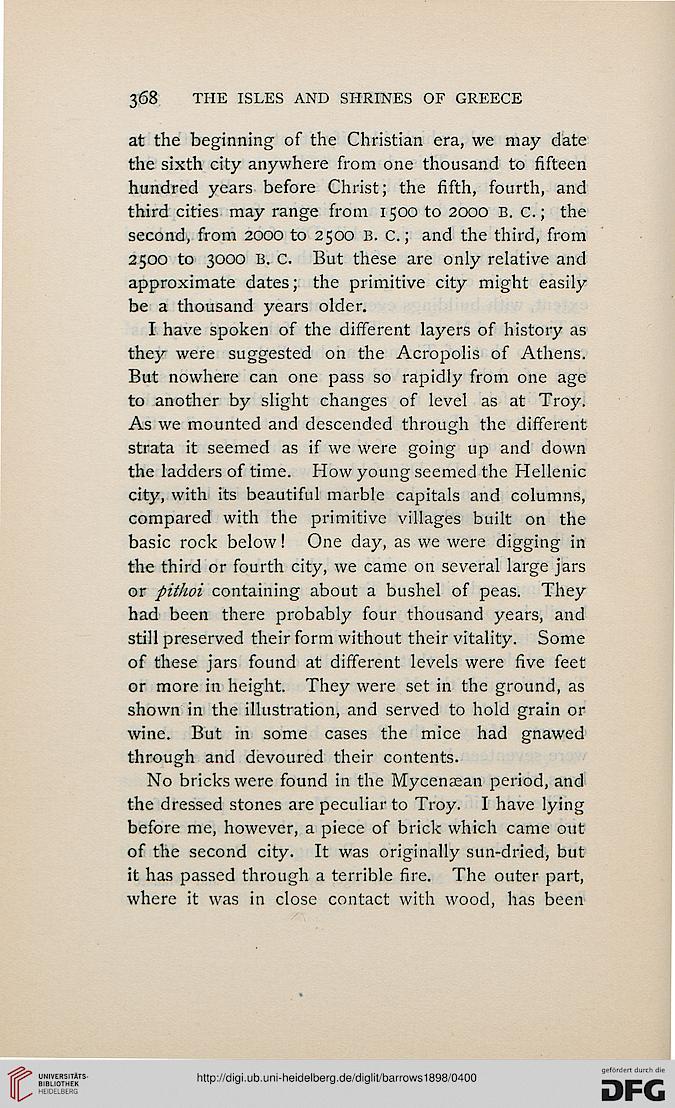 Information about OCR text
368 THE ISLES AND SHRINES OF GREECE

at the beginning of the Christian era, we may date
the sixth city anywhere from one thousand to fifteen
hundred years before Christ; the fifth, fourth, and
third cities may range from 1500 to 2000 B. C.; the
second, from 2000 to 2500 B. c.; and the third, from
2500 to 3000 B. c. But these are only relative and
approximate dates; the primitive city might easily
be a thousand years older.

I have spoken of the different layers of history as
they were suggested on the Acropolis of Athens.
But nowhere can one pass so rapidly from one age
to another by slight changes of level as at Troy.
As we mounted and descended through the different
strata it seemed as if we were going up and down
the ladders of time. How young seemed the Hellenic
city, with its beautiful marble capitals and columns,
compared with the primitive villages built on the
basic rock below! One day, as we were digging in
the third or fourth city, we came on several large jars
or pithoi containing about a bushel of peas. They
had been there probably four thousand years, and
still preserved their form without their vitality. Some
of these jars found at different levels were five feet
or more in height. They were set in the ground, as
shown in the illustration, and served to hold grain or
wine. But in some cases the mice had gnawed
through and devoured their contents.

No bricks were found in the Mycenaean period, and
the dressed stones are peculiar to Troy. I have lying
before me, however, a piece of brick which came out
of the second city. It was originally sun-dried, but
it has passed through a terrible fire. The outer part,
where it was in close contact with wood, has been