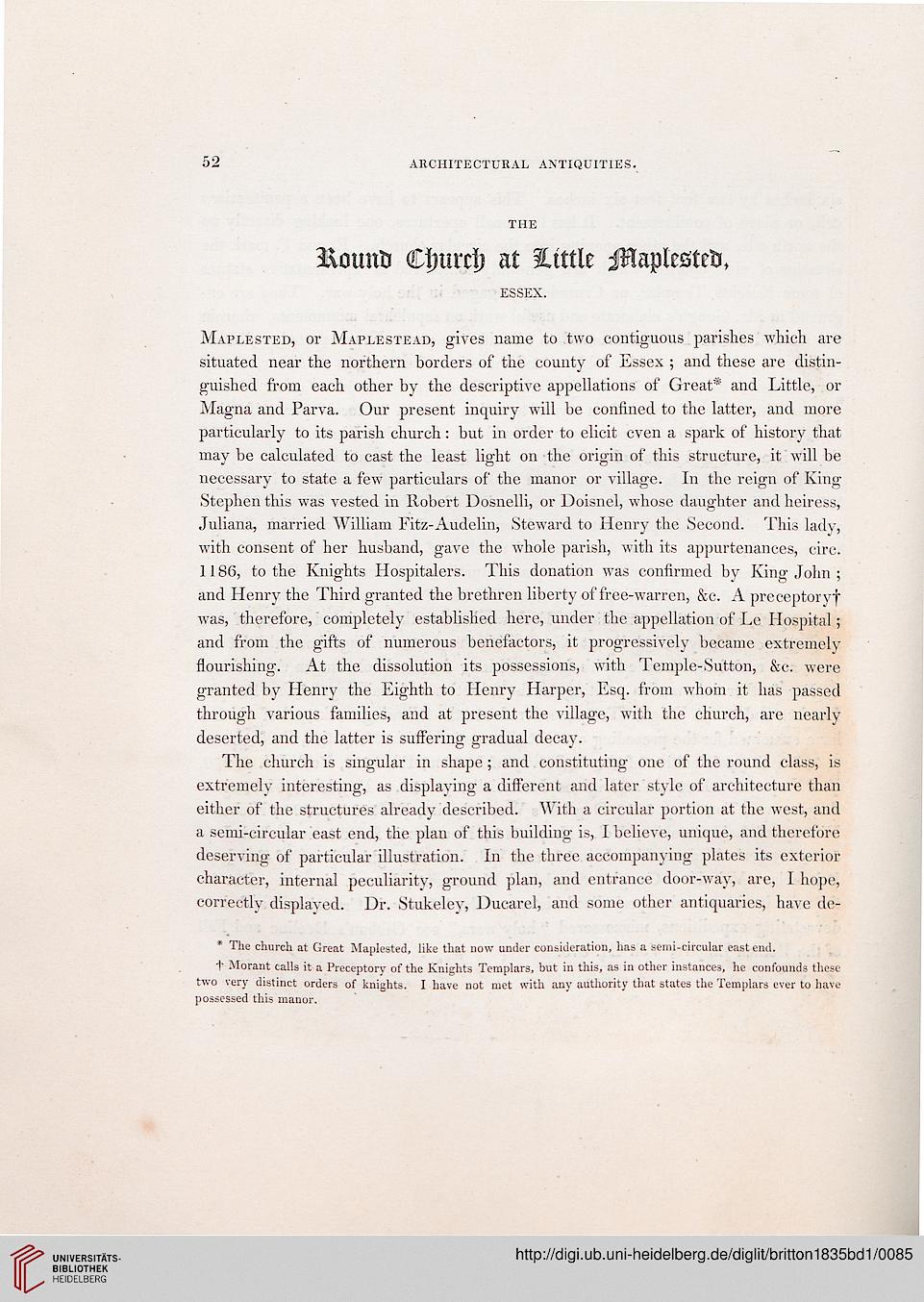 Maplested, or Maplestead, gives name to two contiguous parishes which are
situated near the northern borders of the county of Essex ; and these are distin-
guished from each other by the descriptive appellations of Great* and Little, or
Magna and Parva. Our present inquiry will be confined to the latter, and more
particularly to its parish church : but in order to elicit even a spark of history that
may be calculated to cast the least light on the origin of this structure, it will be
necessary to state a few particulars of the manor or village. In the reign of King
Stephen this was vested in Robert Dosnelli, or Doisnel, whose daughter and heiress,
Juliana, married William Fitz-Audelin, Steward to Henry the Second. This lady,
with consent of her husband, gave the whole parish, with its appurtenances, circ.
1186, to the Knights Hospitalers. This donation was confirmed by King John ;
and Henry the Third granted the brethren liberty of free-warren, &c. A preceptoryf
was, therefore, completely established here, under the appellation of Lc Hospital;
and from the gifts of numerous benefactors, it progressively became extremely
flourishing. At the dissolution its possessions, with Temple-Sutton, &c. were
granted by Henry the Eighth to Henry Harper, Esq. from whom it has passed
through various families, and at present the village, with the church, are nearly
deserted, and the latter is suffering gradual decay.

The church is singular in shape; and constituting one of the round class, is
extremely interesting, as displaying a different and later style of architecture than
either of the structures already described. With a circular portion at the west, and
a semi-circular east end, the plan of this building is, I believe, unique, and therefore
deserving of particular illustration. In the three accompanying plates its exterior
character, internal peculiarity, ground plan, and entrance door-way, are, I hope,
correctly displayed. Dr. Stukeley, Ducarel, and some other antiquaries, have de-

* The church at Great Maplested, like that now under consideration, has a semi-circular east end.

t Morant talis it a Preceptory of the Knights Templars, but in this, as in other instances, he confounds these
two very distinct orders of knights. I have not met with any authority that states the Templars ever to have
possessed this manor.