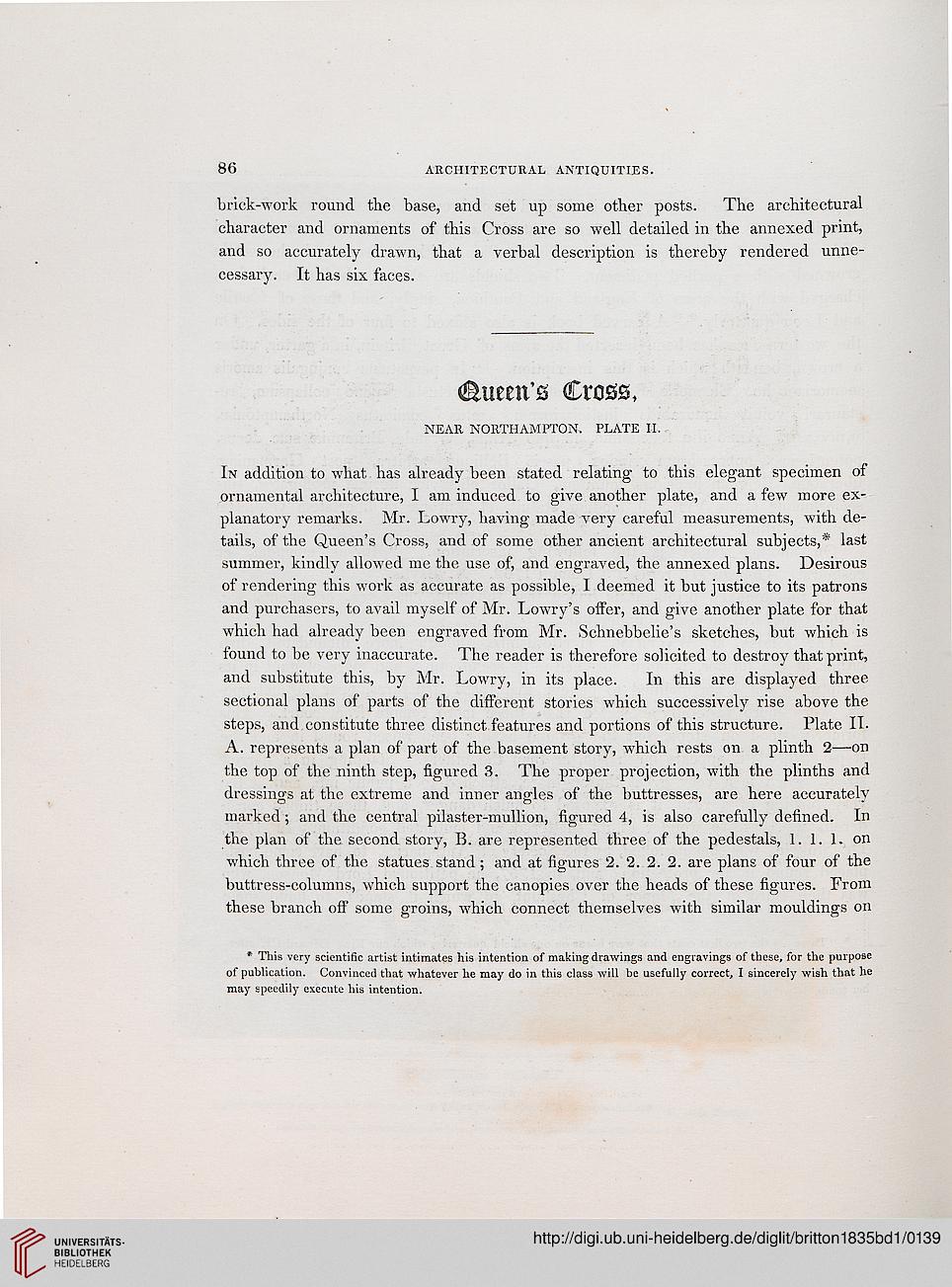 brick-work round the base, and set up some other posts. The architectural
character and ornaments of this Cross are so well detailed in the annexed print,
and so accurately drawn, that a verbal description is thereby rendered unne-
cessary. It has six faces.

In addition to what has already been stated relating to this elegant specimen of
ornamental architecture, I am induced to give another plate, and a few more ex-
planatory remarks. Mr. Lowry, having made very careful measurements, with de-
tails, of the Queen's Cross, and of some other ancient architectural subjects,* last
summer, kindly allowed me the use of, and engraved, the annexed plans. Desirous
of rendering this work as accurate as possible, I deemed it but justice to its patrons
and purchasers, to avail myself of Mr. Lowry's offer, and give another plate for that
which had already been engraved from Mr. Schnebbelie's sketches, but which is
found to be very inaccurate. The reader is therefore solicited to destroy that print,
and substitute this, by Mr. Lowry, in its place. In this are displayed three
sectional plans of parts of the different stories which successively rise above the
steps, and constitute three distinct features and portions of this structure. Plate II.
A. represents a plan of part of the basement story, which rests on a plinth 2—on
the top of the ninth step, figured 3. The proper projection, with the plinths and
dressings at the extreme and inner angles of the buttresses, are here accurately
marked ; and the central pilaster-mullion, figured 4, is also carefully defined. In
the plan of the second story, B. are represented three of the pedestals, 1. 1. 1. on
which three of the statues stand; and at figures 2. 2. 2. 2. are plans of four of the
buttress-columns, which support the canopies over the heads of these figures. From
these branch off some groins, which connect themselves with similar mouldings on

* This very scientific artist intimates his intention of making drawings and engravings of these, for the purpose
of publication. Convinced that whatever he may do in this class will be usefully correct, i sincerely wish that he
may speedily execute his intention.