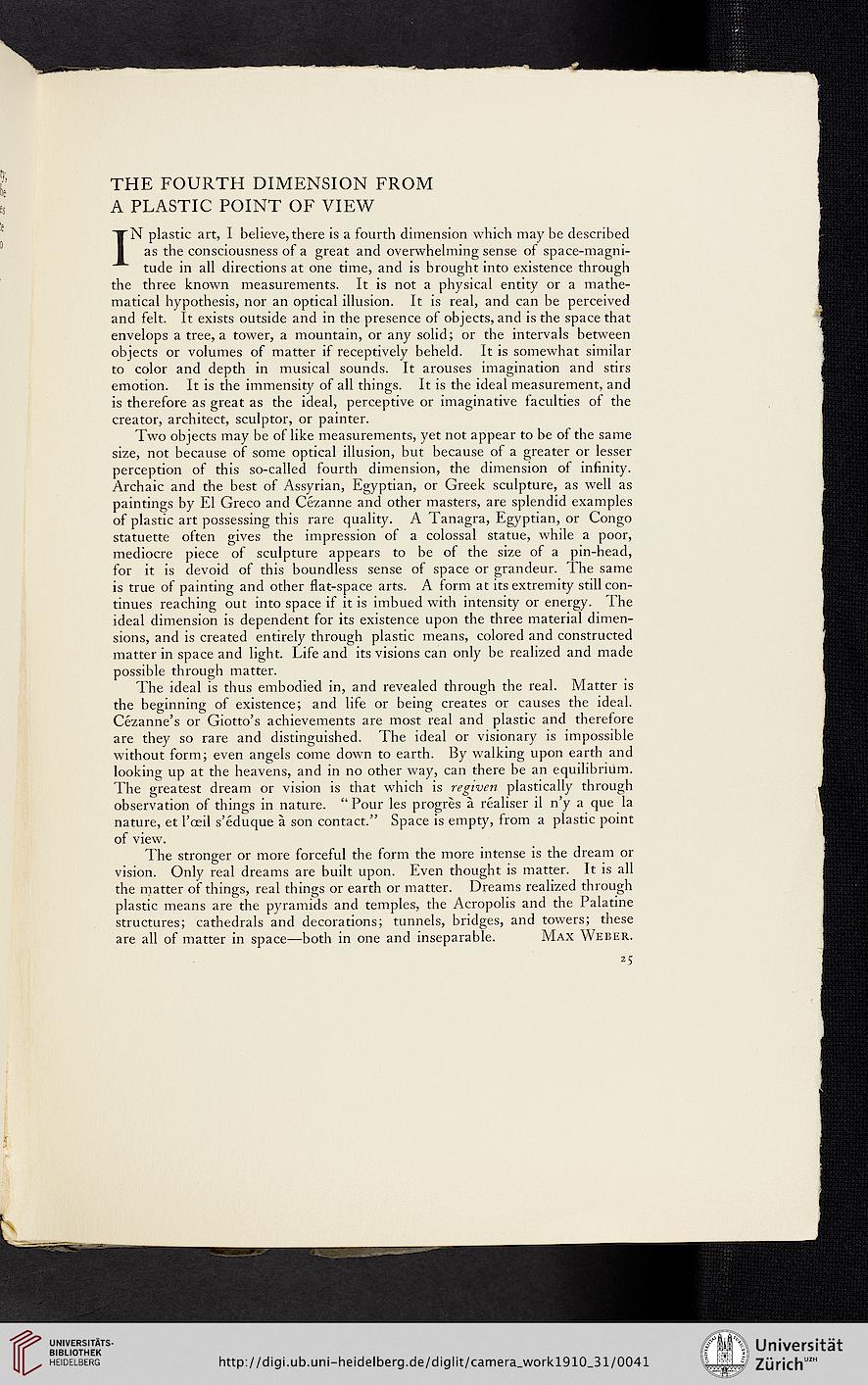 IN plastic art, I believe,there is a fourth dimension which may be described
as the consciousness of a great and overwhelming sense of space-magni-
tude in all directions at one time, and is brought into existence through
the three known measurements. It is not a physical entity or a mathe-
matical hypothesis, nor an optical illusion. It is real, and can be perceived
and felt. It exists outside and in the presence of objects, and is the space that
envelops a tree, a tower, a mountain, or any solid; or the intervals between
objects or volumes of matter if receptively beheld. It is somewhat similar
to color and depth in musical sounds. It arouses imagination and stirs
emotion. It is the immensity of all things. It is the ideal measurement, and
is therefore as great as the ideal, perceptive or imaginative faculties of the
creator, architect, sculptor, or painter.
Two objects may be of like measurements, yet not appear to be of the same
size, not because of some optical illusion, but because of a greater or lesser
perception of this so-called fourth dimension, the dimension of infinity.
Archaic and the best of Assyrian, Egyptian, or Greek sculpture, as well as
paintings by El Greco and Cézanne and other masters, are splendid examples
of plastic art possessing this rare quality. A Tanagra, Egyptian, or Congo
statuette often gives the impression of a colossal statue, while a poor,
mediocre piece of sculpture appears to be of the size of a pin-head,
for it is devoid of this boundless sense of space or grandeur. The same
is true of painting and other flat-space arts. A form at its extremity still con-
tinues reaching out into space if it is imbued with intensity or energy. The
ideal dimension is dependent for its existence upon the three material dimen-
sions, and is created entirely through plastic means, colored and constructed
matter in space and light. Life and its visions can only be realized and made
possible through matter.
The ideal is thus embodied in, and revealed through the real. Matter is
the beginning of existence; and life or being creates or causes the ideal.
Cézanne’s or Giotto’s achievements are most real and plastic and therefore
are they so rare and distinguished. The ideal or visionary is impossible
without form; even angels come down to earth. By walking upon earth and
looking up at the heavens, and in no other way, can there be an equilibrium.
The greatest dream or vision is that which is regiven plastically through
observation of things in nature. “ Pour les progrès à réaliser il n’y a que la
nature, et l’œil s’éduque à son contact.” Space is empty, from a plastic point
of view.
The stronger or more forceful the form the more intense is the dream or
vision. Only real dreams are built upon. Even thought is matter. It is all
the matter of things, real things or earth or matter. Dreams realized through
plastic means are the pyramids and temples, the Acropolis and the Palatine
structures; cathedrals and decorations; tunnels, bridges, and towers; these
are all of matter in space—both in one and inseparable. Max Weber.