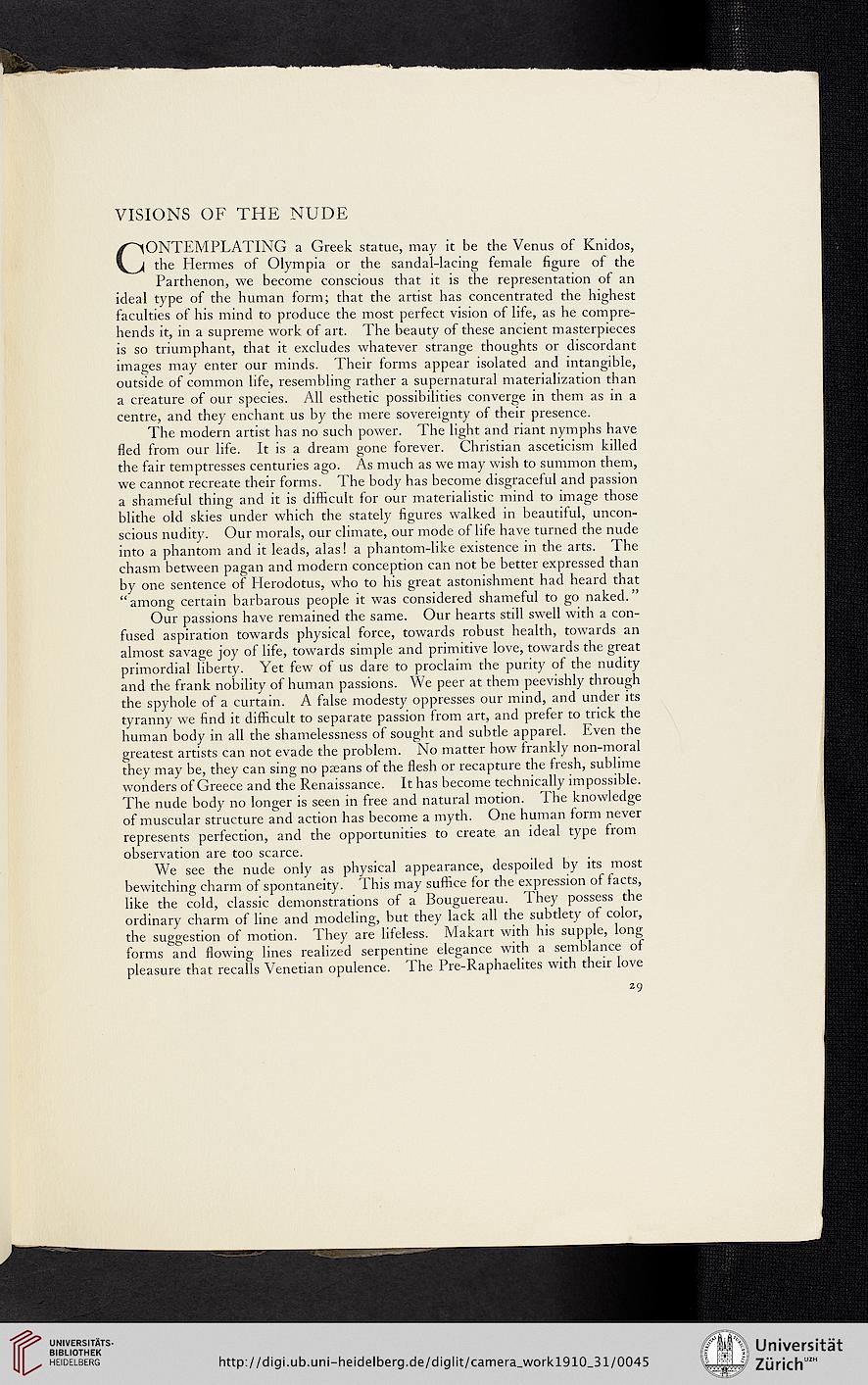 Information about OCR text
VISIONS OF THE NUDE

CONTEMPLATING a Greek statue, may it be the Venus of Knidos,
the Hermes of Olympia or the sandal-lacing female figure of the
Parthenon, we become conscious that it is the representation of an
ideal type of the human form; that the artist has concentrated the highest
faculties of his mind to produce the most perfect vision of life, as he compre-
hends it, in a supreme work of art. The beauty of these ancient masterpieces
is so triumphant, that it excludes whatever strange thoughts or discordant
images may enter our minds. Their forms appear isolated and intangible,
outside of common life, resembling rather a supernatural materialization than
a creature of our species. All esthetic possibilities converge in them as in a
centre, and they enchant us by the mere sovereignty of their presence.
The modern artist has no such power. The light and riant nymphs have
fled from our life. It is a dream gone forever. Christian asceticism killed
the fair temptresses centuries ago. As much as we may wish to summon them,
we cannot recreate their forms. The body has become disgraceful and passion
a shameful thing and it is difficult for our materialistic mind to image those
blithe old skies under which the stately figures walked in beautiful, uncon-
scious nudity. Our morals, our climate, our mode of life have turned the nude
into a phantom and it leads, alas! a phantom-like existence in the arts. The
chasm between pagan and modern conception can not be better expressed than
by one sentence of Herodotus, who to his great astonishment had heard that
“among certain barbarous people it was considered shameful to go naked.”
Our passions have remained the same. Our hearts still swell with a con-
fused aspiration towards physical force, towards robust health, towards an
almost savage joy of life, towards simple and primitive love, towards the great
primordial liberty. Yet few of us dare to proclaim the purity of the nudity
and the frank nobility of human passions. We peer at them peevishly through
the spyhole of a curtain. A false modesty oppresses our mind, and under its
tyranny we find it difficult to separate passion from art, and prefer to trick the
human body in all the shamelessness of sought and subtle apparel. Even the
greatest artists can not evade the problem. No matter how frankly non-moral
they may be, they can sing no paeans of the flesh or recapture the fresh, sublime
wonders of Greece and the Renaissance. It has become technically impossible.
The nude body no longer is seen in free and natural motion. The knowledge
of muscular structure and action has become a myth. One human form never
represents perfection, and the opportunities to create an ideal type from
observation are too scarce.
We see the nude only as physical appearance, despoiled by its most
bewitching charm of spontaneity. This may suffice for the expression of facts,
like the cold, classic demonstrations of a Bouguereau. They possess the
ordinary charm of line and modeling, but they lack all the subtlety of color,
the suggestion of motion. They are lifeless. Makart with his supple, long
forms and flowing lines realized serpentine elegance with a semblance of
pleasure that recalls Venetian opulence. The Pre-Raphaelites with their love
29