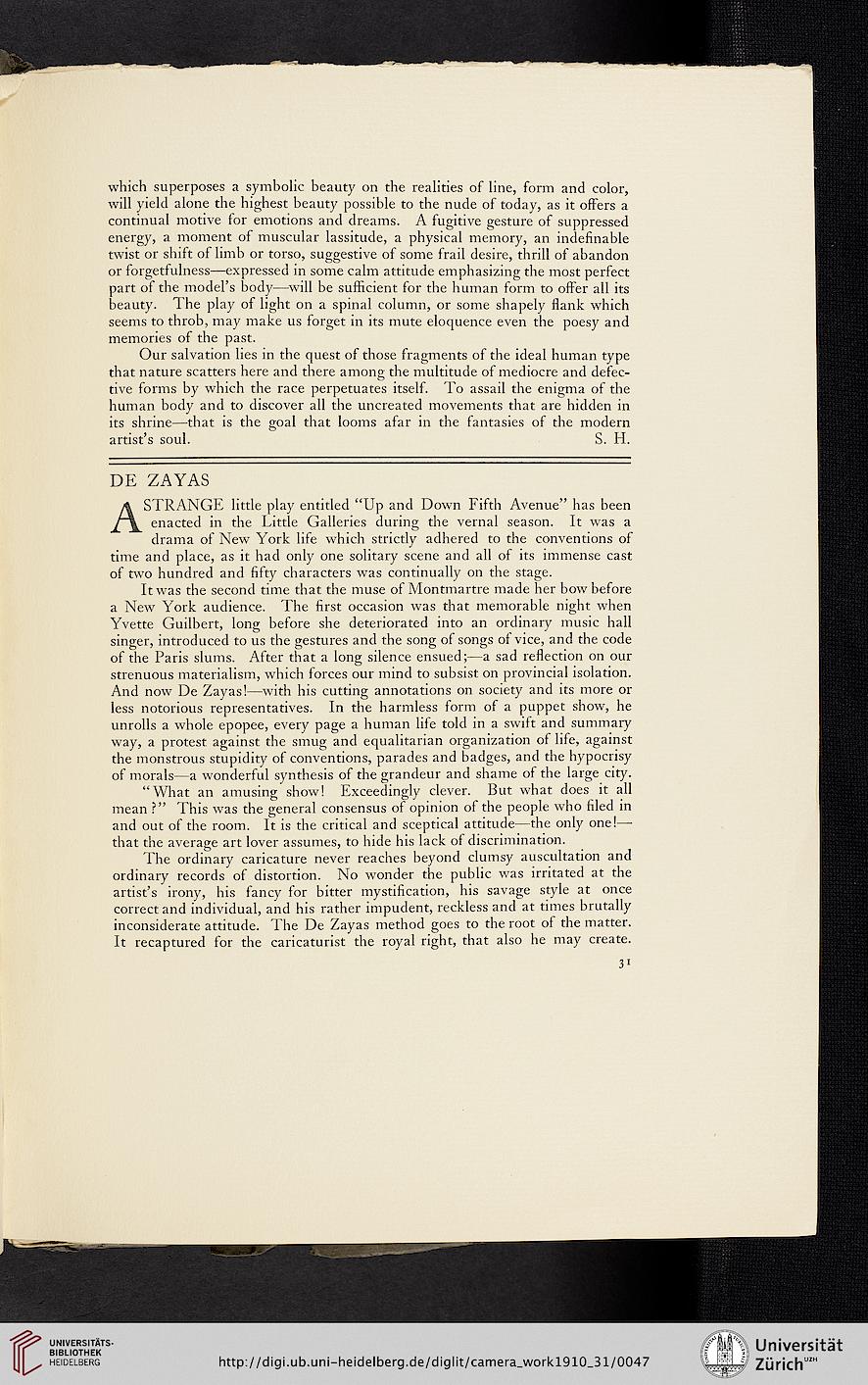 Hinweise zum OCR-Text
which superposes a symbolic beauty on the realities of line, form and color,
will yield alone the highest beauty possible to the nude of today, as it offers a
continual motive for emotions and dreams. A fugitive gesture of suppressed
energy, a moment of muscular lassitude, a physical memory, an indefinable
twist or shift of limb or torso, suggestive of some frail desire, thrill of abandon
or forgetfulness—expressed in some calm attitude emphasizing the most perfect
part of the model’s body—will be sufficient for the human form to offer all its
beauty. The play of light on a spinal column, or some shapely flank which
seems to throb, may make us forget in its mute eloquence even the poesy and
memories of the past.
Our salvation lies in the quest of those fragments of the ideal human type
that nature scatters here and there among the multitude of mediocre and defec-
tive forms by which the race perpetuates itself. To assail the enigma of the
human body and to discover all the uncreated movements that are hidden in
its shrine—that is the goal that looms afar in the fantasies of the modern
artist’s soul. S. H.

DE ZAYAS
A STRANGE little play entitled “Up and Down Fifth Avenue” has been
enacted in the Little Galleries during the vernal season. It was a
drama of New York life which strictly adhered to the conventions of
time and place, as it had only one solitary scene and all of its immense cast
of two hundred and fifty characters was continually on the stage.
It was the second time that the muse of Montmartre made her bow before
a New York audience. The first occasion was that memorable night when
Yvette Guilbert, long before she deteriorated into an ordinary music hall
singer, introduced to us the gestures and the song of songs of vice, and the code
of the Paris slums. After that a long silence ensued;—a sad reflection on our
strenuous materialism, which forces our mind to subsist on provincial isolation.
And now De Zayas!—with his cutting annotations on society and its more or
less notorious representatives. In the harmless form of a puppet show, he
unrolls a whole epopee, every page a human life told in a swift and summary
way, a protest against the smug and equalitarian organization of life, against
the monstrous stupidity of conventions, parades and badges, and the hypocrisy
of morals—a wonderful synthesis of the grandeur and shame of the large city.
“What an amusing show! Exceedingly clever. But what does it all
mean ?” This was the general consensus of opinion of the people who filed in
and out of the room. It is the critical and sceptical attitude—the only one!—
that the average art lover assumes, to hide his lack of discrimination.
The ordinary caricature never reaches beyond clumsy auscultation and
ordinary records of distortion. No wonder the public was irritated at the
artist’s irony, his fancy for bitter mystification, his savage style at once
correct and individual, and his rather impudent, reckless and at times brutally
inconsiderate attitude. The De Zayas method goes to the root of the matter.
It recaptured for the caricaturist the royal right, that also he may create.
31