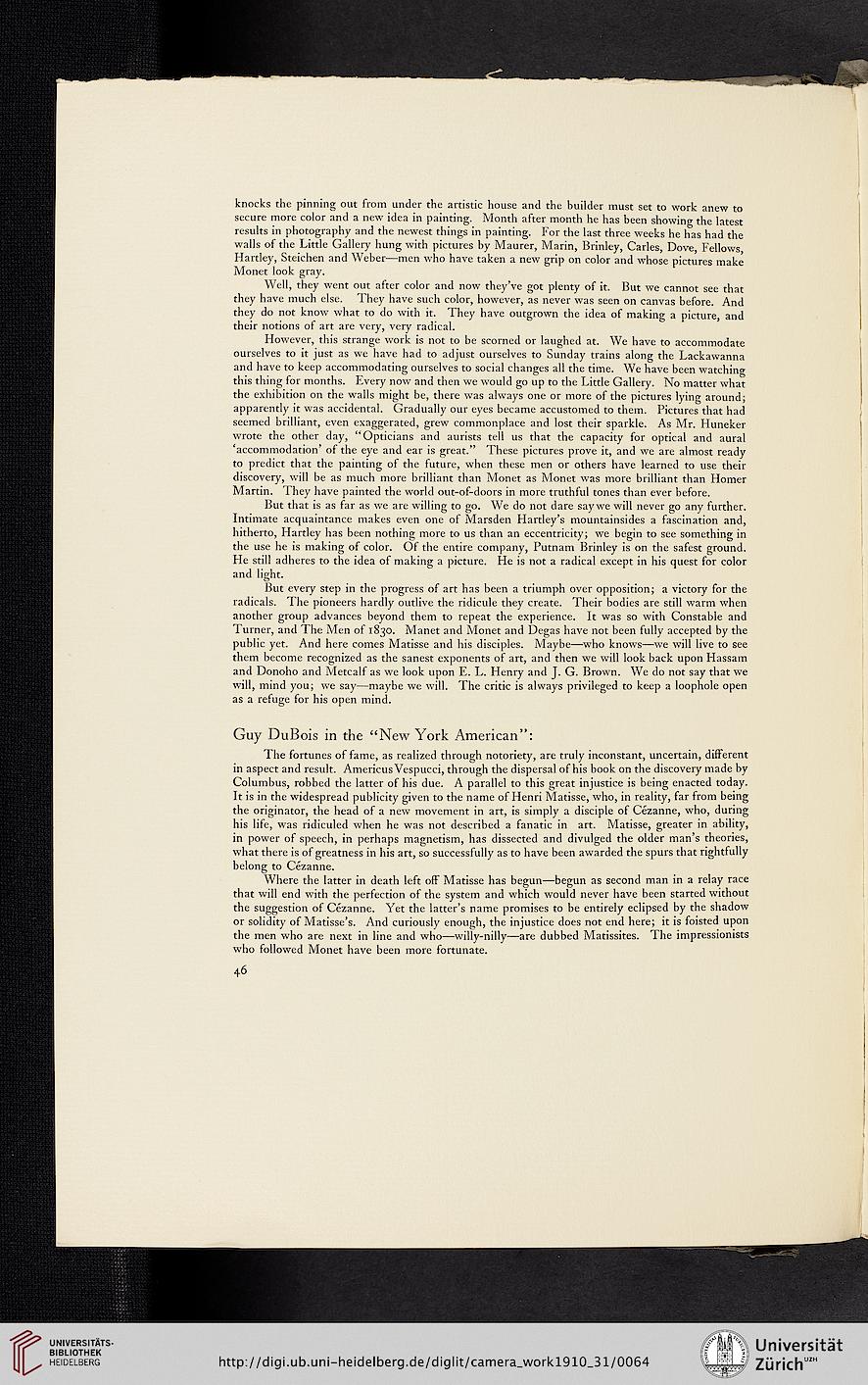 Hinweise zum OCR-Text
knocks the pinning out from under the artistic house and the builder must set to work anew to
secure more color and a new idea in painting. Month after month he has been showing the latest
results in photography and the newest things in painting. For the last three weeks he has had the
walls of the Little Gallery hung with pictures by Maurer, Marin, Brinley, Carles, Dove, Fellows,
Hartley, Steichen and Weber—men who have taken a new grip on color and whose pictures make
Monet look gray.
Well, they went out after color and now they’ve got plenty of it. But we cannot see that
they have much else. They have such color, however, as never was seen on canvas before. And
they do not know what to do with it. They have outgrown the idea of making a picture, and
their notions of art are very, very radical.
However, this strange work is not to be scorned or laughed at. We have to accommodate
ourselves to it just as we have had to adjust ourselves to Sunday trains along the Lackawanna
and have to keep accommodating ourselves to social changes all the time. We have been watching
this thing for months. Every now and then we would go up to the Little Gallery. No matter what
the exhibition on the walls might be, there was always one or more of the pictures lying around;
apparently it was accidental. Gradually our eyes became accustomed to them. Pictures that had
seemed brilliant, even exaggerated, grew commonplace and lost their sparkle. As Mr. Huneker
wrote the other day, “Opticians and aurists tell us that the capacity for optical and aural
‘accommodation’ of the eye and ear is great.” These pictures prove it, and we are almost ready
to predict that the painting of the future, when these men or others have learned to use their
discovery, will be as much more brilliant than Monet as Monet was more brilliant than Homer
Martin. They have painted the world out-of-doors in more truthful tones than ever before.
But that is as far as we are willing to go. We do not dare say we will never go any further.
Intimate acquaintance makes even one of Marsden Hartley's mountainsides a fascination and,
hitherto, Hartley has been nothing more to us than an eccentricity; we begin to see something in
the use he is making of color. Of the entire company, Putnam Brinley is on the safest ground.
He still adheres to the idea of making a picture. He is not a radical except in his quest for color
and light.
But every step in the progress of art has been a triumph over opposition; a victory for the
radicals. The pioneers hardly outlive the ridicule they create. Their bodies are still warm when
another group advances beyond them to repeat the experience. It was so with Constable and
Turner, and The Men of 1830. Manet and Monet and Degas have not been fully accepted by the
public yet. And here comes Matisse and his disciples. Maybe—who knows—we will live to see
them become recognized as the sanest exponents of art, and then we will look back upon Hassam
and Donoho and Metcalf as we look upon E. L. Henry and J. G. Brown. We do not say that we
will, mind you; we say—maybe we will. The critic is always privileged to keep a loophole open
as a refuge for his open mind.

Guy DuBois in the “New York American":
The fortunes of fame, as realized through notoriety, are truly inconstant, uncertain, different
in aspect and result. Americus Vespucci, through the dispersal of his book on the discovery made by
Columbus, robbed the latter of his due. A parallel to this great injustice is being enacted today.
It is in the widespread publicity given to the name of Henri Matisse, who, in reality, far from being
the originator, the head of a new movement in art, is simply a disciple of Cézanne, who, during
his life, was ridiculed when he was not described a fanatic in art. Matisse, greater in ability,
in power of speech, in perhaps magnetism, has dissected and divulged the older man’s theories,
what there is of greatness in his art, so successfully as to have been awarded the spurs that rightfully
belong to Cézanne.
Where the latter in death left off Matisse has begun—begun as second man in a relay race
that will end with the perfection of the system and which would never have been started without
the suggestion of Cézanne. Yet the latter’s name promises to be entirely eclipsed by the shadow
or solidity of Matisse’s. And curiously enough, the injustice does not end here; it is foisted upon
the men who are next in line and who—willy-nilly—are dubbed Matissites. The impressionists
who followed Monet have been more fortunate.
46