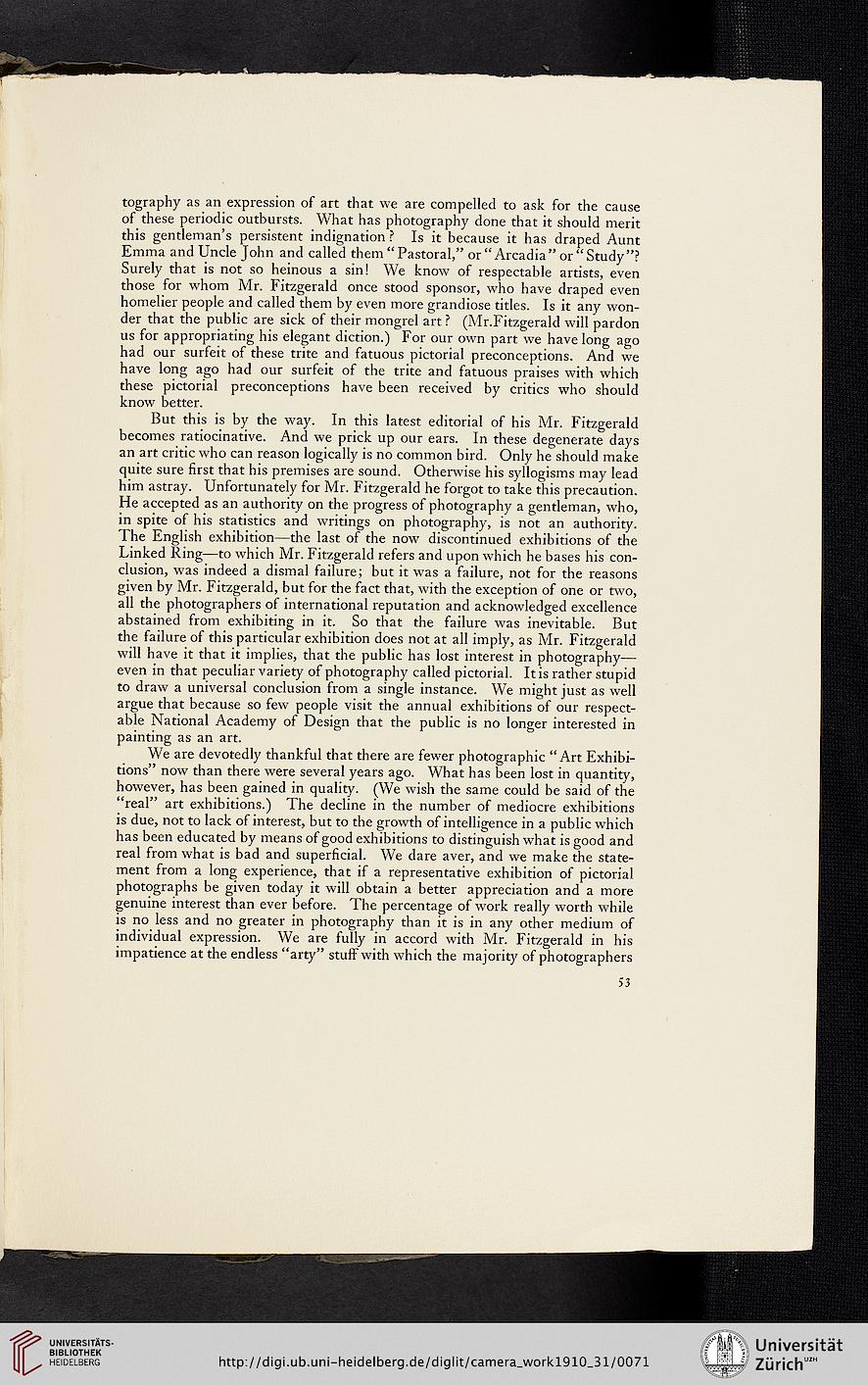 Information about OCR text
tography as an expression of art that we are compelled to ask for the cause
of these periodic outbursts. What has photography done that it should merit
this gentleman’s persistent indignation ? Is it because it has draped Aunt
Emma and Uncle John and called them “ Pastoral,” or “ Arcadia” or “Study”?
Surely that is not so heinous a sin! We know of respectable artists, even
those for whom Mr. Fitzgerald once stood sponsor, who have draped even
homelier people and called them by even more grandiose titles. Is it any won-
der that the public are sick of their mongrel art ? (Mr.Fitzgerald will pardon
us for appropriating his elegant diction.) For our own part we have long ago
had our surfeit of these trite and fatuous pictorial preconceptions. And we
have long ago had our surfeit of the trite and fatuous praises with which
these pictorial preconceptions have been received by critics who should
know better.
But this is by the way. In this latest editorial of his Mr. Fitzgerald
becomes ratiocinative. And we prick up our ears. In these degenerate days
an art critic who can reason logically is no common bird. Only he should make
quite sure first that his premises are sound. Otherwise his syllogisms may lead
him astray. Unfortunately for Mr. Fitzgerald he forgot to take this precaution.
He accepted as an authority on the progress of photography a gentleman, who,
in spite of his statistics and writings on photography, is not an authority.
The English exhibition—the last of the now discontinued exhibitions of the
Linked Ring—to which Mr. Fitzgerald refers and upon which he bases his con-
clusion, was indeed a dismal failure; but it was a failure, not for the reasons
given by Mr. Fitzgerald, but for the fact that, with the exception of one or two,
all the photographers of international reputation and acknowledged excellence
abstained from exhibiting in it. So that the failure was inevitable. But
the failure of this particular exhibition does not at all imply, as Mr. Fitzgerald
will have it that it implies, that the public has lost interest in photography—
even in that peculiar variety of photography called pictorial. It is rather stupid
to draw a universal conclusion from a single instance. We might just as well
argue that because so few people visit the annual exhibitions of our respect-
able National Academy of Design that the public is no longer interested in
painting as an art.
We are devotedly thankful that there are fewer photographic “ Art Exhibi-
tions” now than there were several years ago. What has been lost in quantity,
however, has been gained in quality. (We wish the same could be said of the
“real” art exhibitions.) The decline in the number of mediocre exhibitions
is due, not to lack of interest, but to the growth of intelligence in a public which
has been educated by means of good exhibitions to distinguish what is good and
real from what is bad and superficial. We dare aver, and we make the state-
ment from a long experience, that if a representative exhibition of pictorial
photographs be given today it will obtain a better appreciation and a more
genuine interest than ever before. The percentage of work really worth while
is no less and no greater in photography than it is in any other medium of
individual expression. We are fully in accord with Mr. Fitzgerald in his
impatience at the endless “arty” stuff with which the majority of photographers