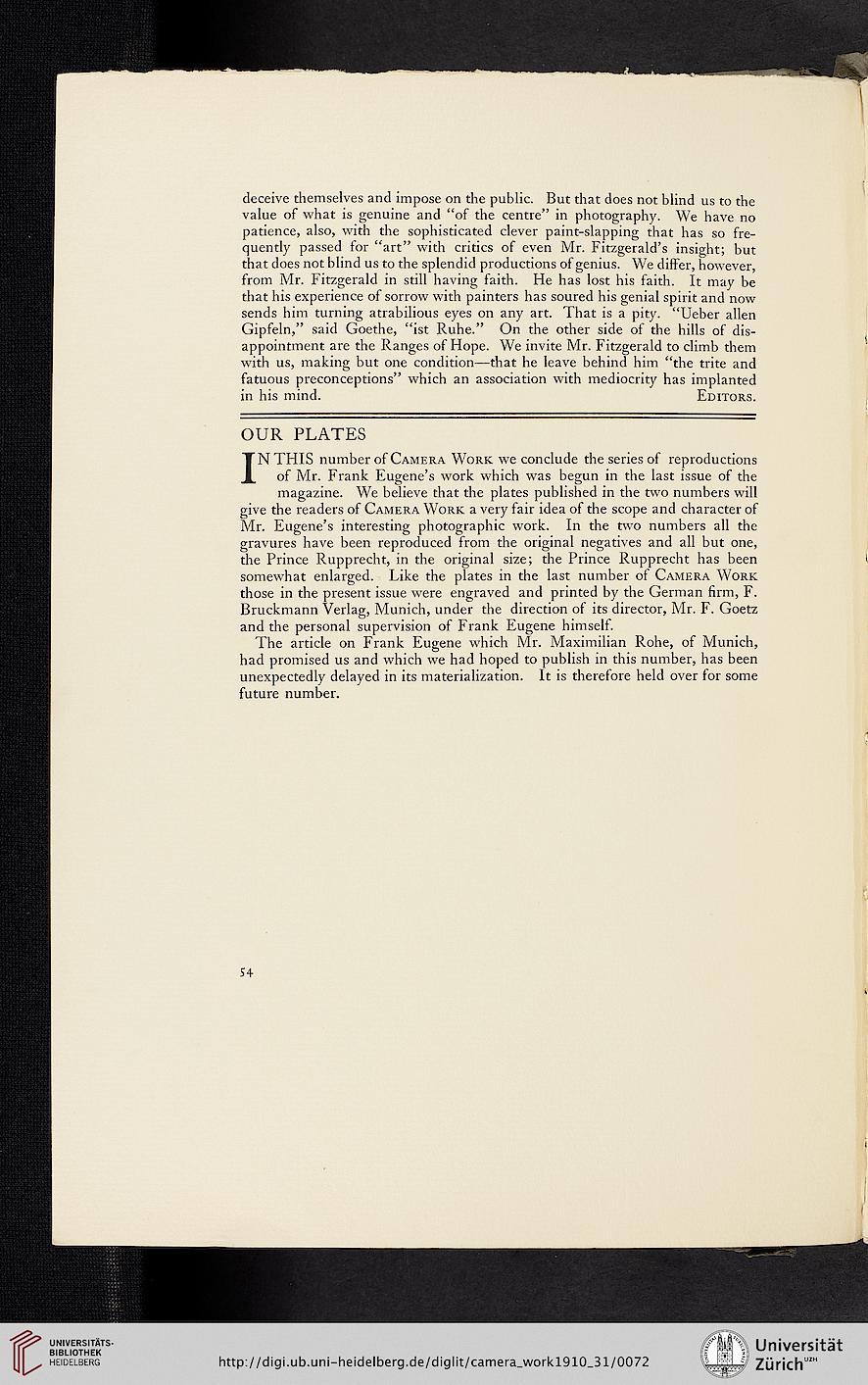 Information about OCR text
deceive themselves and impose on the public. But that does not blind us to the
value of what is genuine and “of the centre” in photography. We have no
patience, also, with the sophisticated clever paint-slapping that has so fre-
quently passed for “art” with critics of even Mr. Fitzgerald’sinsight; but
that does not blind us to the splendid productions of genius. We differ, however,
from Mr. Fitzgerald in still having faith. He has lost his faith. It may be
that his experience of sorrow with painters has soured his genial spirit and now
sends him turning atrabilious eyes on any art. That is a pity. “Ueber allen
Gipfeln,” said Goethe, “ist Ruhe.” On the other side of the hills of dis-
appointment are the Ranges of Hope. We invite Mr. Fitzgerald to climb them
with us, making but one condition—that he leave behind him “the trite and
fatuous preconceptions” which an association with mediocrity has implanted
in his mind. Editors.

OUR PLATES
IN THIS number of Camera Work we conclude the series of reproductions
of Mr. Frank Eugene’s work which was begun in the last issue of the
magazine. We believe that the plates published in the two numbers will
give the readers of Camera Work a very fair idea of the scope and character of
Mr. Eugene’s interesting photographic work. In the two numbers all the
gravures have been reproduced from the original negatives and all but one,
the Prince Rupprecht, in the original size; the Prince Rupprecht has been
somewhat enlarged. Like the plates in the last number of Camera Work
those in the present issue were engraved and printed by the German firm, F.
Bruckmann Verlag, Munich, under the direction of its director, Mr. F. Goetz
and the personal supervision of Frank Eugene himself.
The article on Frank Eugene which Mr. Maximilian Rohe, of Munich,
had promised us and which we had hoped to publish in this number, has been
unexpectedly delayed in its materialization. It is therefore held over for some
future number.