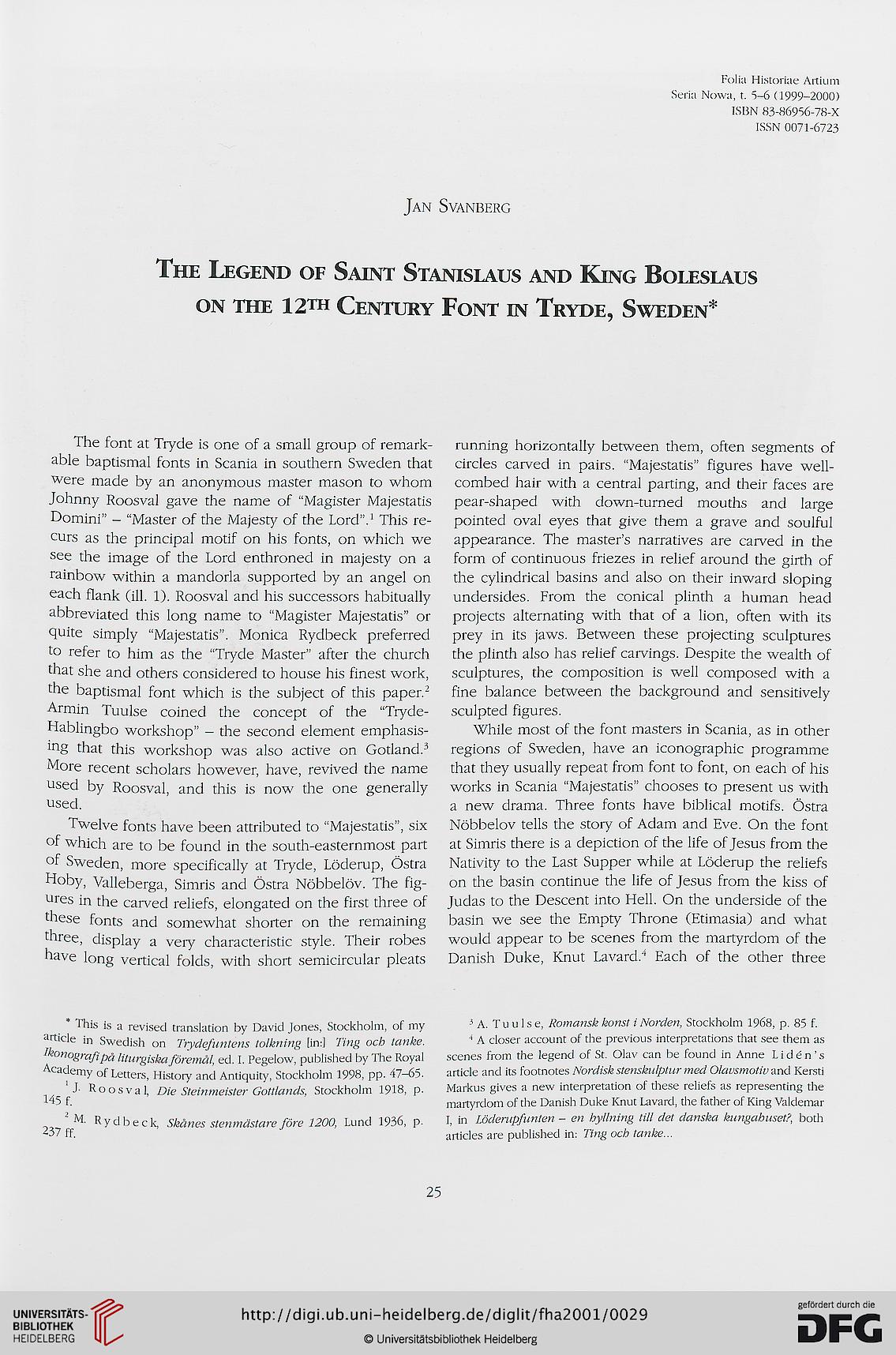 The Legend of Saint Stanislaus and Kong Boleslaus
ON THE 12™ CeNTURY FONT IN TrYDE, SwEDEN*

The font at Tryde is one of a smali group of remark-
able baptismal fonts in Scania in Southern Sweden that
were madę by an anonymous master mason to whom
Johnny Roosval gave the name of “Magister Majestatis
Domini” - “Master of the Majesty of the Lord”.1 This re-
curs as the principal motif on his fonts, on which we
see the image of the Lord enthroned in majesty on a
rainbow within a mandorla supported by an angel on
each flank (ill. 1). Roosval and his successors habitually
abbreviated this long name to “Magister Majestatis” or
quite simply “Majestatis”. Monica Rydbeck preferred
to refer to him as the “Tryde Master” after the church
that she and others considered to house his finest work,
the baptismal font which is the subject of this paper.2
Armin Tuulse coined the concept of the “Tryde-
Hablingbo workshop” — the second element emphasis-
ing that this workshop was also active on Gotland.1
Morę recent scholars however, have, revived the name
used by Roosval, and this is now the one generally
used.

Twelve fonts have been attributed to “Majestatis”, six
of which are to be found in the south-easternmost part
of Sweden, morę specifically at Tiyde, Loderup, Ostra
Hoby, Valleberga, Simris and Ostra Nóbbelóv. The fig-
ures in the carved reliefs, elongated on the first three of
these fonts and somewhat shorter on the remaining
three, display a very characteristic style. Their robes
have long vertical folds, with short semicircular pleats

running horizontally between them, often segments of
circles carved in pairs. “Majestatis” figures have well-
combed hair with a central parting, and their faces are
pear-shaped with down-tumed mouths and large
pointed oval eyes that give them a grave and soulful
appearance. The master’s narratives are carved in the
form of continuous friezes in relief around the girth of
the cylindrical basins and also on their inward sloping
undersides. From the conical plinth a human head
projects alternating with that of a lion, often with its
prey in its jaws. Between these projecting sculptures
the plinth also has relief carvings. Despite the wealth of
sculptures, the composition is well composed with a
fine balance between the background and sensitively
sculpted figures.

While most of the font masters in Scania, as in other
regions of Sweden, have an iconographic programme
that they usually repeat from font to font, on each of his
works in Scania “Majestatis” chooses to present us with
a new drama. Three fonts have biblical motifs. Ostra
Nobbelov tells the story of Adam and Eve. On the font
at Simris there is a depiction of the life of Jesus from the
Nativity to the Last Supper while at Loderup the reliefs
on the basin continue the life of Jesus from the kiss of
Judas to the Descent into Heli. On the underside of the
basin we see the Empty Throne (Etimasia) and what
would appear to be scenes from the martyrdom of the
Danish Duke, Knut Lavard.4 Each of the other three

4 A closer account of the previous interpretations that see them as
scenes from the legend of St. 01av can be found in Annę L i d e n ’ s
article and its footnotes Nordisk stenskulptur med Olavsmotiv and Kersti
Markus gives a new interpretation of these reliefs as representing the
martyrdom of the Danish Duke Knut Lavard, the father of King Valdemar
I, in Lóderupfunten - en hyllning till det danska kungahuset?, both
articles are published in: Ting och tankę...