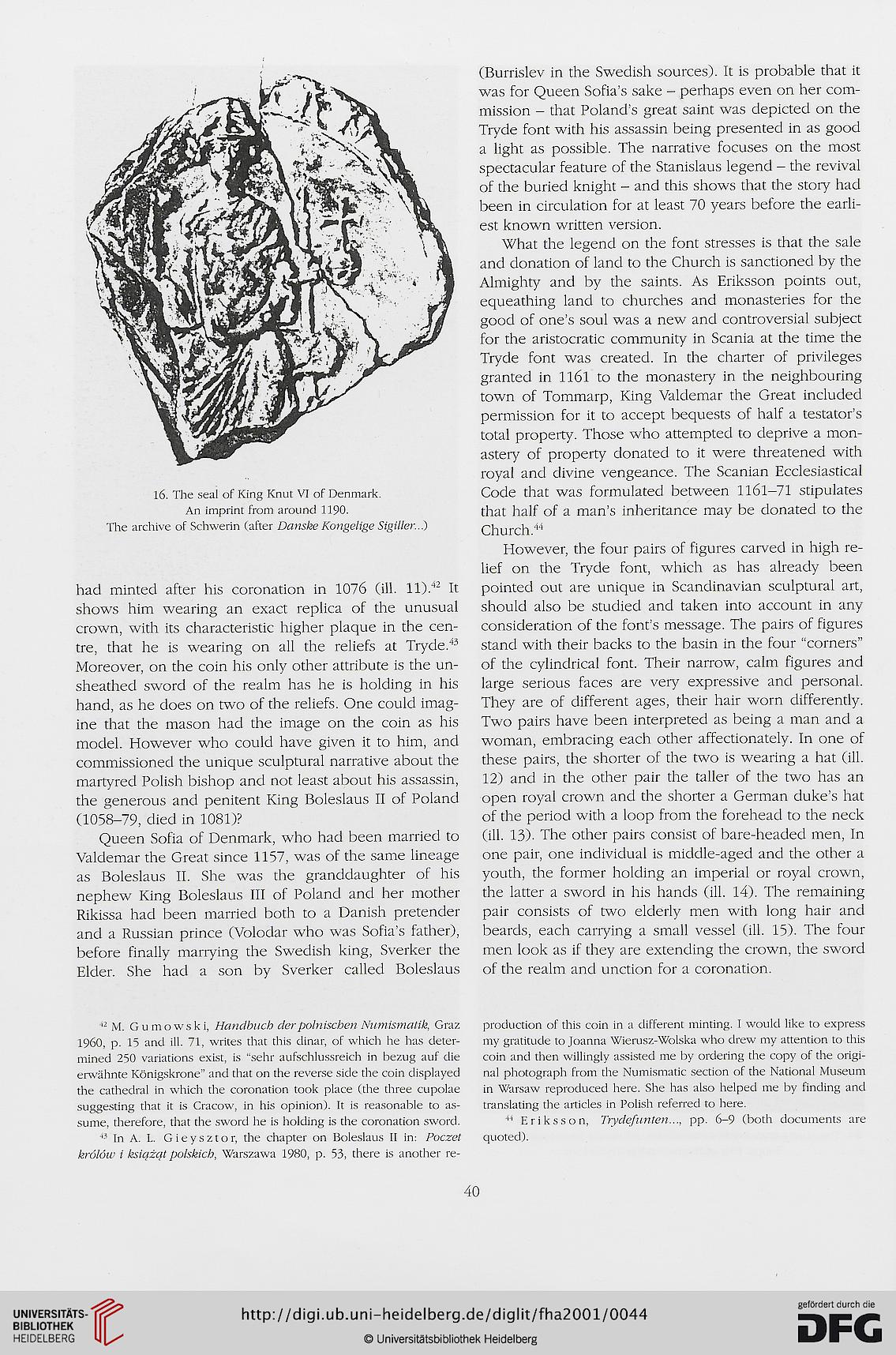 Information about OCR text
16. The seal of King Knut VI of Denmark.

hacl minted after his coronation in 1076 (ill. II).42 It
shows him wearing an exact replica of the unusual
crown, with its characteristic higher plaąue in the cen-
trę, that he is wearing on all the reliefs at Tryde.43
Moreover, on the coin his only other attribute is the un-
sheathed sword of the realm has he is holding in his
hand, as he does on two of the reliefs. One could imag-
ine that the mason had the image on the coin as his
model. However who could have given it to him, and
commissioned the uniąue sculptural narrative about the
martyrecl Polish bishop and not least about his assassin,
the generous and penitent King Boleslaus II of Poland
(1058-79, died in 1081)?

Queen Sofia of Denmark, who had been married to
Valdemar the Great sińce 1157, was of the same lineage
as Boleslaus II. She was the granddaughter of his
nephew King Boleslaus III of Poland and her mother
Rikissa had been married both to a Danish pretender
and a Russian prince (Volodar who was Sofia’s father),
before finally marrying the Swedish king, Sverker the
Elder. She had a son by Sverker called Boleslaus

42 M. Gumowski, Handbuch derpolnischen Numismatik, Graz
1960, p. 15 and ill. 71, writes that this dinar, of which he has cleter-
mined 250 variations exist, is “sehr aufschlussreich in bezug auf die
erwiihnte Kónigskrone” and that on the reverse side the coin displayed
the cathedral in which the coronation took place (the three cupolae
suggesting that it is Cracow, in his opinion). It is reasonable to as-
sume, therefore, that the sword he is holding is the coronation sword.

43 In A. L. Gieysztor, the chapter on Boleslaus II in: Poczet

(Burrislev in the Swedish sources). It is probable that it
was for Queen Sofia’s sake - perhaps even on her com-
mission - that Poland’s great saint was depicted on the
Tryde font with his assassin being presented in as good
a light as possible. The narrative focuses on the most
spectacular feature of the Stanislaus legend - the revival
of the buried knight - and this shows that the story had
been in circulation for at least 70 years before the earli-
est known written version.

What the legend on the font stresses is that the sale
and donation of land to the Church is sanctioned by the
Almighty and by the saints. As Eriksson points out,
eąueathing land to churches and monasteries for the
good of one’s soul was a new and controversial subject
for the aristocratic community in Scania at the time the
Tryde font was created. In the charter of privileges
granted in llól to the monastery in the neighbouring
town of Tommarp, King Valdemar the Great included
permission for it to accept beąuests of half a testator’s
total property. Those who attempted to deprive a mon-
astery of property donated to it were threatened with
royal and divine vengeance. The Scanian Ecclesiastical
Codę that was formulated between 1161-71 stipulates
that half of a man’s inheritance may be donated to the
Church.44

However, the four pairs of figures carved in high re-
lief on the Tryde font, which as has already been
pointed out are uniąue in Scandinavian sculptural art,
should also be studied and taken into account in any
consideration of the font’s message. The pairs of figures
stand with their backs to the basin in the four “corners”
of the cylindrical font. Their narrow, calm figures and
large serious faces are very expressive and personal.
They are of different ages, their hair worn differently.
Two pairs have been interpreted as being a man and a
woman, embracing each other affectionately. In one of
these pairs, the shorter of the two is wearing a hat (ill.
12) and in the other pair the taller of the two has an
open royal crown and the shorter a German duke’s hat
of the period with a loop from the forehead to the neck
(ill. 13). The other pairs consist of bare-headed men, In
one pair, one individual is middle-aged and the other a
youth, the former holding an imperial or royal crown,
the latter a sword in his hands (ill. 14). The remaining
pair consists of two elderly men with long hair and
beards, each carrying a smali vessel (ill. 15). The four
men look as if they are extending the crown, the sword
of the realm and unction for a coronation.

production of this coin in a different minting. I would like to express
my gratitude to Joanna Wierusz-Wolska who drew my attention to this
coin and then willingly assisted me by ordering the copy of the odgi-
nał photograph from the Numismatic section of the National Museum
in Warsaw reproduced here. She has also helped me by finding and
translating the articles in Polish referred to here.